Fighter
[view]
“All right, who's next! Bring it on!”
—Wade in a support conversation with Lot.

Wade is a young fighter from Fire Emblem: The Binding Blade battling alongside Dieck and a childhood friend of Lot and brother of Mary. He appears to be superstitious, believing when he was young that monsters lived in an abandoned mine near his home, but Lot confirmed that the "monsters" were actually just snakes.

He makes a brief cameo appearance in Chapter 18 of the Hasha no Tsurugi manga.

Description: A young man fighting alongside Dieck. Brash and impulsive.

Wade's base skill and speed can cause quite a bit of trouble for him. His accuracy will be low against any enemy that doesn't use a lance, and even then his accuracy is still not reliable. Wade can only double Soldiers and Knights early on, and he can be doubled by some Mercenaries, Cavaliers, and Nomads if he doesn't grow in speed. While his skill does get better, his speed barely does. This means that Wade will almost always have trouble doubling and may actually get doubled in return.  His resistance is also very bad, which means magical enemies can do quite a number on him. These factors can offset his high HP. He can hit hard if he does hit, and getting bows is useful for his accuracy and against fliers. Bartre is very similar to Wade, but with better strength, not needing a Hero Crest, and enough base speed to double some enemies and not get doubled in return.

Wade - Sincere Axeman (頼もしき斧戦士 Tanomoshiki ono senshi, Confident Axefighter)
"After returning home, Wade worked to cultivate the land and construct homes in the Isles. His work continued through many generations and eventually became the greatest city in the Isles."

Wade is illustrated in the trading card game Fire Emblem Cipher with the following cards: 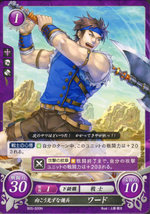 Wade is a Middle English given name derived from the pre-7th century Old English verb "wadan" (wada) meaning "to go," or as a habitational name from the Old English word "(ge)waed" meaning "ford."

It may also reference a mythical sea-giant in the legends of various peoples that inhabited the Baltic and North seas.

Artwork of Wade in Fire Emblem 0 (Cipher) by Karuta Shiki.

Wade as a Fighter in Fire Emblem 0 (Cipher).

Wade's portrait in The Binding Blade.

Wade as a Fighter

Wade as a Warrior