Knight
[view]
“By the honorable name of Caelin, we will never fail! You’ll taste the power of our knights, like cold steel in your mouth!”
— Wallace

Wallace is a playable character in Fire Emblem: The Blazing Blade. He was the Knight Commander of House Caelin until Lundgren made his mad bid for power.

As a new squire to Caelin, Wallace was apparently thin and weak. The other squires teased him, calling him a girl. He had a teacher by the name of Renault, implied to be Bishop Renault during his time as a mercenary. Wallace eventually became strong enough to rise up the ranks of Caelin's army, and continues to do so well in to his adulthood.

In a support conversation Wallace shares with Kent, it is revealed that several years prior to the events of The Blazing Blade, Lord Hausen had assigned Wallace to prevent Madelyn and Hassar from escaping to the Sacaen plains. A few days after he was assigned to this job, Wallace caught up with Madelyn and Hassar. When Wallace caught them, both Madelyn and Hassar attempted to take the blame for each other. Seeing this as testament to the strength of their love for each other, Wallace chose to let them go. Although he attempts to lie that the pair had eluded him to Hausen, Hausen saw through his lie and threw him into a dungeon for six months.

Some time after his imprisonment, Wallace was allowed to resume his duties, where he was eventually promoted to become the commander of the knights of Caelin, with Kent and Sain figuring amongst the ranks of these knights. Wallace later chose to retire, where he led an unassuming life as a farmer.

When Lundgren begins to rise to power, he order Wallace to capture the "impostor" granddaughter and her two "disloyal" knights. Upon encountering Lyn in Chapter 9, Wallace, after talking to her, ultimately decides that her claim as the granddaughter of Hausen is true based on what he calls the "bright and true" look in her eyes. He then joins her and helps her on her journey to defeat Lundgren. After the battle, Wallace embarks on a quest to find a cause to lend his blade to, his battle lust renewed by his travels with Lyn.

Wallace reemerges in Lloyd's version of Chapter 23E/24H. Here, he seems to have been led astray by his poor sense of direction, leading him to find himself lost in Bern. It is, however, revealed in an A support with Lyn that he had deliberately traveled there to destroy the hideout of the Taliver Bandits responsible for killing her parents. On learning that Lyn is in danger by Kent, Wallace eagerly joins the ranks of Eliwood, Hector and Lyn's army.

After the army's struggle against Nergal and his morphs concludes, Wallace actually ends up getting lost while attempting to return to Caelin. Stranded in Ilia, he spends the rest of his days tilling the frozen soil.

Wallace is depicted as competitive and battle-loving. He makes a concerted effort to seek out physical fights, bearing utmost confidence in his skills. Wallace's pride in both his abilities and country are such that he has the tendency to appear arrogant when he talks of either. He considers himself to be a rival to both Hassar and Vaida, unwilling to yield to the idea that either is his superior in battle.

Despite the above traits, Wallace is also warmhearted and loyal. Keeping the best interests of people at heart, he is known to put himself in considerable danger to lend aid to those he cares for. This is evidenced by his decision to travel to Bern alone for the sole purpose of exacting revenge on Lyn's behalf by obliterating the bandits responsible for killing her parents. To this end, Wallace can be a little too forceful in pushing forth his ideas of what is best for others, as depicted through the way he puts Wil a relentless training regime.

Description: A retired knight of Caelin. Constantly testing himself.

Wallace is an odd unit in many respects, but generally not in a beneficial way. In Lyn Mode's Normal difficulty, he is meant to serve as the player's tutorial on promotion, and therefore comes with a Knight Crest which he is scripted to force the player to promote him with. However, given the Knight Crest's high cost and the possibility of promoting Sain or Kent with it instead, most players do not choose to use the promotion item on him when they are given any choice in the matter on Hard (even if they do not plan to early promote, the extra funds are helpful). This will make Wallace essentially useless, as his statline as a Knight is quite poor, even aside from the typical Knight weaknesses of low mobility and Speed. If the player does attempt to promote Wallace, he becomes a borderline invincible combatant for his brief period of availability in Lyn Mode. However, enemies in the mode are so weak that such a unit is hardly necessary; at this point, Sain, Kent, Rath, and Florina should be more than sufficient to handle any remaining threats.

Wallace makes his return in Lloyd's version of Four-Fanged Offense, well into the midgame, which is reached if Lyn, Eliwood, and Hector's combined levels are under 50. He is somewhat inefficient to recruit in the map, as he starts some distance away from the player, while the boss is much closer and capable of moving. If the player has played Lyn Mode, Wallace maintains his stats, but if the player has not, he becomes a General with slightly higher stats than he would possess otherwise. This incarnation of Wallace is the best for him, as he has the best stats and will not need a rare Knight Crest for his promotion, but remains rather poor at this phase in the game, due to his mediocre Movement, very lackluster Speed leaving him unable to double, and the presence of similarly tanky units, like Hawkeye, Lowen, Oswin, or Hector, that also boast much better offense. If Wallace remains a Knight, all these flaws will be exacerbated further, and he will have essentially no good points to speak of. In particular, the drop to his Resistance means that mages will now rip through his supposedly high defenses, and his Speed will be so bad that even Blazing Blade's notoriously sluggish enemies can sometimes double him.

Overall, Wallace is at best extremely flawed, and at worst borderline useless. His mixture of mediocre availability, poor class, opportunity cost in Lyn Mode, clumsy offense, and lack of utility make him a common candidate for the game's worst character, and even his strongest performance is little more than a filler unit.

Wallace: Curses! Looks like I relied too much on my armor!
Lyn: General Wallace!

Kent: General Wallace!
Sain: General Wallace... Why did you have to push yourself so hard? Oh... We will not forget you...
Wallace: Quiet, boy! I'm not dead yet!
Sain: Ah! It's alive! I mean... He's... You're OK!
Wallace: Of course I am! This is nothing more than a scratch! Nggg!! Oww!!!
Sain: Easy... You shouldn't move around so much.
Kent: I assure you, Lord Wallace, we will see Lady Lyndis safely to the marquess. Have faith in us, and focus on mending your wounds.
Wallace: Bah... So, now I'm to be sent home like a squire...
Sain: You've been in retirement, sir. You simply tried too--
Wallace: Hold your tongue, boy! I know my place. Kent! Sain! Take care of the lady Lyndis! Or else!
Sain & Kent: Yes, milord!

Wallace: Eagler!
Eagler: General Wallace... So you've sided with the girl, too, have you?
Wallace: I fight for Caelin's honor, not for Lundgren's lies!
Eagler: Ah... Is that so? You are—Enough! There's nothing more to be said. I name you traitors all! Come! Do your worst!
Wallace: Fool... At the very least, let mine be the blow that finishes you!

"Wallace intended to return to Caelin, but he got lost and ended up in Ilia. He now spends his days tilling the frozen soil."

Wallace is illustrated in the trading card game Fire Emblem Cipher with the following cards: 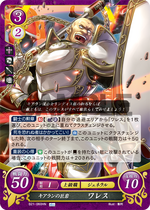