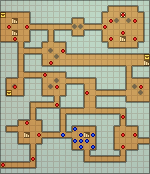 Chapter script
[view]
“Putting her faith in Corrin, Sakura and her retainers join the group. Together, they set out for Izumo, using the Eternal Stairway as a shortcut.”
—Opening Narration

At the beginning of the chapter, Rinkah will rejoin your army with whatever training she received in the first few chapters. This can be a good or bad thing, as she can be either an effective physical wall or weak liability who can't even use Iron weaponry.

In Lunatic, the worst thing that can happen on this map is to have your units separated by the wind. Factoring this, the right side of the map is the safest for your whole army as you can position everyone in such a way that if the wind pushes you, no one gets left behind. Your goal is to have the wind push your entire army straight to Fuga's platform as fast as possible.

Although Fuga's platform appears dangerous because of all the units, you can defeat most of them in a single round of combat due to the enemy samurais having low defence. Also note that Fuga does not have any ranged weapons nor does he move, making him quite harmless when trying to position your units. Once your entire army is on Fuga's platform, take out as many enemy units as you can, saving Fuga for last.

When safe to do so, take out Fuga. Remember, this is seize so you still have as many turns as you need to clear the map afterward. Once Fuga is taken care of, barricade your army on Fuga's platform and wait for the enemies that move to come to you. This will allow you to easily take down enemies in a safe environment and because the platform is so large, if the wind is due to push you, simply re-position your units to a safe place. Once you've taken care of as many units as you can, venture out of the platform to clear the remaining enemies and loot the chests.

Similar to the Conquest version, the wind blows in this cycle, you can use this to determine your path of action, and what comes after it. Preventing bad positioning is essential in this map for higher difficulties. (There are 5 columns, x x x x x).

The pattern of wind paths are different from the pattern used in the Conquest version.