Rally Luck, Renewal
[view]
The War Cleric is a class that debuted in Fire Emblem Awakening.

A class that is both physical and magical, the War Cleric class takes on both combat and support roles. It is one of the promoted forms of both the Cleric and Troubadour classes, employing Axes and Staves as its equipment of choice. The War Cleric class is the female equivalent of the War Monk class.

It, alongside the War Monk class, later returns as a DLC Class in Fire Emblem: Three Houses's Cindered Shadows DLC.

War Clerics are a much more balanced healing unit compared to most commonly promoted healers in past Fire Emblem games. This class focuses mainly on durability rather than healing potency, given that their defensive caps are higher than those of their Skill and Speed.

Another interesting feature of this class is that their weapon of choice is the Axe, which favors high Attack in exchange for accuracy. The War Cleric is not exactly suited for an offensive role due to their rather mediocre Strength and semi-low Skill and Speed. Nevertheless, given their good defenses, they can operate as good anti-magic units as they can sustain hits from them and exploit their lower Defense. 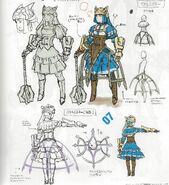