Ward (ウォード Uōdo) is a playable character from TearRing Saga: Berwick Saga. He is a veteran knight of Sinon, the King's right-handed man and an important advisor to Reese.

Ward is much like a typical Jagen character - joins at high level with high stats, but has pretty low growths. Unlike the archetypal Jagen, Ward's base stats are high enough to make him endgame viable at base, which is good, considering that Ward is forced to go on the final Mission. Add in Guard and the ability to use high level equipment right off of the bat, and you get a character that will fit in pretty much every situation.

Like Reese, Ward cannot participate in side missions, and if he dies, it will be instant Game Over. 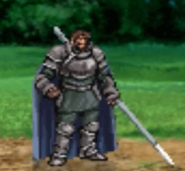 Ward's mounted battle sprite
Add a photo to this gallery