Varies
[view]
“Transports an adjacent ally to another location.”
—In-game description, Shadow Dragon and New Mystery of the Emblem

Warp (ワープの杖, Wāpu no tsue) is a recurring Staff in the Fire Emblem series. When cast, this staff is typically known to enwrap an adjacent ally unit within a glowing pentagram, thereby transporting them to a space away from the user. Such an ability may potentially offer a huge tactical advantage, as the staff can be used to boost the Movement range of slower ally units, or even transport a competent ally unit to a key part of a map in order to perform a variety of actions, such as that of intercepting a thief. Certain Secret Shops across the series may only be accessed by means of employing the Warp staff, such as that of the one located in Chapter 29E/31H in The Blazing Blade.

As the Warp staff tends to be both hard to come by and in possession of very limited durability, it is thus advisable for the player to employ its powers with rational discretion, although it is obtained very early on in some games (most notably when it appears in Lena's inventory in Shadow Dragon and The Blade Of Light, as well as in remakes of said game).

In TearRing Saga: Utna Heroes Saga, this staff is also known as the ☆Transport Staff (てんそうの杖 Tensou no tsue), and is locked to Renee.

The Warp staff, as it appears in the second series of the TCG.

Animation of Merric using Warp in Mystery of the Emblem. 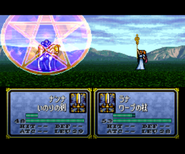 Lana preparing to Warp Nanna to the safe confines of a castle in Genealogy of the Holy War. 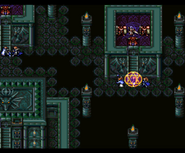 Tina preparing to Warp Mareeta to a far-off location in Thracia 776.

Ellen warping Fae to a space adjacent to an enemy Berserker in The Binding Blade.