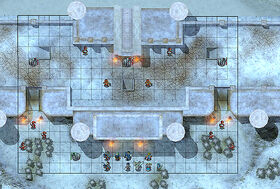 Chapter script
[view]
“At The Longfort dividing Ylisse and Ferox, the Shepherds are taken for brigands and attacked by the Feroxi Guard. A show of force clears the matter up.”
—Opening Narration

Warrior Realm (戦士の王国 Senshi no Ōkoku lit. Kingdom of Warriors in the Japanese version) is Chapter 3 of Fire Emblem Awakening.

This chapter is not too difficult, though misplaying your units can be brutal. Firstly, have Chrom speak with the NPC Kellam to add him to your ranks. Kellam's high defense rating allows him to lure in the archers to the left so your units can ambush them. The soldier may also attack Kellam, so an Axe or second Lance user could be of use.

To the right, send Sumia, a cavalry unit, and two others to attack from the right. Since all of the archers are planted at the left, Sumia can wander in the right without getting picked off by archers.

When proceeding to the stairs, position a unit like Vaike or the Avatar to be ready to take out the Knights. Once they are gone, sword users, like Chrom and Sully, can handle the Fighters and Mercenaries that approach next. Once they are all gone, all that remains is the boss. The boss has similar weaknesses to the other two Knights, so magic is particularly effective at defeating the boss, as well as Axes from Frederick or Vaike. You can get a Hammer from one of the fighters that Frederick or Vaike can use to easily defeat Raimi. Also, Chrom's Rapier can be used to inflict decent damage on her, but the weapon triangle disadvantage can be problematic, especially because Raimi can attack Lissa with a Javelin if she attempts to heal Chrom. Once the boss is defeated, the chapter has been completed.

This is arguably the toughest chapter in the game in Lunatic Mode. There's no guarantee that you will survive, and even less of a chance that you can do so without having some martyrs.

Take full advantage of the battle preparation screen to view your enemies. Check what they're holding carefully, along with their attack stats (as there are fortunately no mages on this level).

On your first turn, have Chrom run over to Kellam, recruit him, and then run back out of the range of the archers. Moving out of the ranges of the knights is not completely necessary (because Kellam is a decent knight and Chrom has Dual Strike+) but recommended. You should then push all units to the west and have Frederick kill off one of the enemies (preferably one of the archers, if possible). Keep your other units out of direct fire from the archers and knights, and you should be fine.

The enemies will swarm your forces, especially the archers. If you haven't killed off one of the two archers on this side by now, then there is no guarantee that Frederick will survive the beating that he can (and probably will) receive. The other units from the east will come from behind.

Have every unit besides Frederick defeat the weakened enemies. It should be decently easy, assuming that you use either your Avatar or Miriel to defeat the knight. The archers are easy to kill, just swarm them with units who can attack the archer from one space away. These archers don't have Pass, so just keep units out of their range so that they can't move at all. Have Frederick heal if needed and then charge the east units.

The archers (if they're still alive) can't move at all, so they aren't a problem here. The enemies from the east, however, are another story. They probably won't defeat Frederick, but they'll bring his health down significantly. Other than that, this is pretty straightforward.

Have whatever weak units you have finish off the archers. If they are already dead, then begin bringing units to the east and assisting Frederick in finishing off the weakened enemies. With proper placement and a bit of luck, it is completely possible to defeat all of the lower enemies this turn. As long as you take out both the enemy knight and the archer, then you should be fine, whatever the outcome.

You should now have two door keys. Go up through the west doorway, and have any unit other than Frederick open the door. Trade items if necessary. Make sure to send your units in one large group, as trying to swarm from both sides ends in failure due to the hammer barbarian on the east side. Defeat the knight at the top of the steps.

All of the enemy units besides Raimi will charge your units. Assuming that you kept your units out of enemy range, that's really all they can do.

You must kill the hammer enemy this turn. No exceptions. The alternative is to waste Frederick's turn by having him hide from the enemy, and probably losing a unit to the other barbarian and the archer. Having Miriel and the Avatar snipe it with spells, and then have Frederick equip an iron sword, pair up with Chrom, and attack it. Surround the archer as usual.

The final knight can't reach you in one turn, so have fun watching it blindly run into your range. You can either snipe it with Miriel and the Avatar, or you can simply use Frederick's newfound hammer on it.

The boss, Raimi, wields a short spear. The simplest way to defeat her is to use Miriel's fire tome, the Avatar's thunder tome, Chrom's rapier, and Frederick's hammer in quick succession. This way, your lesser units can gain experience.

After clearing the first wave of enemies and acquiring the two door keys, focus on defeating the Knights behind each door utilizing magic users like Robin or Miriel. No other enemy should approach you if you are not within their range except for the Knight. After disposing of the Knights, have Sumia be at the eastern area, and paired with Kellem, raising her defense stat, while the rest of the forces are at the western area.

This will cause the Mercenaries to attack them on their respective side, and Sumia's high speed prevents enemies from hitting her twice, and having Kellem boost her defense prevents her from being killed in one shot. Frederick will likely deal high damage the Mercenary attacking him, if not outright defeat him.

Upon this, the rest of the enemies, aside from the boss, will immediately attempt to attack the enemies on their respective areas. Have Sumia retreat immediately down the stairs to the lower area, with her ability to travel farther than the others, which will cause the enemies to continue to follow her, thus effectively splitting the enemy forces in half for a while, as the western area can then be free for the taking by the remaining forces you have kept there.

Once the western area has been conquered, continue to have Sumia lead the enemies to the western area stairs. Once there, have your forces focus on destroying the major threat of the Barbarian carrying the hammer, and then the rest of the enemies, which shouldn't be a problem.

After defeating them, proceed to defeat the boss.

As you selected "Lunatic+" while starting a new game, make sure you know what you are doing. At this point, maintain the utmost hope that Frederick and the Avatar have at least 14 ~ 17 DEF apiece; otherwise, this chapter will be nigh-impossible. This is the start of another set of dreaded skills - perhaps you had survived Luna+, Vantage+, and Pass, but here is the introduction of Pavise+, Aegis+, and Counter. This strategy may not work for you at all, due to the nature of Lunatic+ mode; thus, the strategy will be general to try and make up for the many variables in Lunatic+ mode.

Before you begin facing the enemies on the map, you HAVE to look at their ability sets. The new abilities tend to come up quite frequently, and they are extremely annoying. The most troublesome ability on the map is Counter, which can easily kill you if you cannot OHKO any given enemy. This may not seem like a problem, but this particular map seems to put it on every enemy. Simply continue resetting until the game gives you something that is actually possible to beat.

You MUST ensure that not too many units that have an attack range of 1 on this map have counter. I also hope that your Avatar, while paired with Chrom with a C support (+4 speed) has enough speed to double at least some enemies.

At first, if you immediately recruit Kellam, pair up with him, then walk out of enemy range, no enemies will attack you. This is useful, as it keeps the pressure off of you for turn 1. Be wary, though, that the moment a unit has been aggro'ed, the rest of the units on the other side will rush toward you. Your best chances lie with trying to clear out one side of the map with Chrom+Avatar and Frederick+Kellam, then meeting the threat at the other. Sumia is required on this map, so I advise bringing Lissa along to pair up with her; a flying healer is great.

It is also recommended that you keep Virion's Elixir on hand, if you have not used it yet.

Gang up on one unit for Turn 3 to take them out, then weather the attacks on enemy turn 3. Finish them off on player phase 4/enemy phase 4 and ensure Sumia+Lissa is safe for enemy phase 4. Meet the enemy threat on player phase 5. If you are still alive, congrats. Open a door and kill the nearest armored unit while staying out of range of the other units; they will not aggro if you do so. Heal up, bait, and play smart. From this point on, strategies vary too greatly to try to be explained.

Make sure that you keep in mind units that Avatar can double that have counter but cannot be killed in one turn. These will be very dangerous for him/her, and it may be better to simply place Frederick in front unequipped.