View source
watch 25:37
'Fire Emblem: The Sacred Stones' - Chapter 7
Do you like this video?
Play Sound 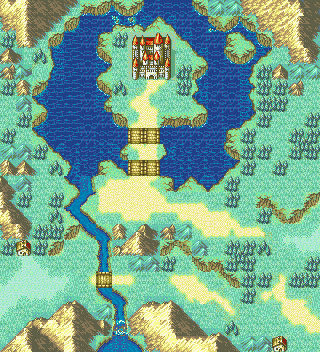 Chapter script
[view]
“Rumors say that Ephraim has been defeated and taken prisoner. Now Eirika must find a way to rescue her brother from beneath enemy eyes. Eirika's company rushes towards Castle Renvall, where Ephraim is being held. Surrounded by lakes, Renvall is a natural fortress, all but unassailable. A lone bridge, held by the enemy, is its only entrance. Eirika has only one choice. Eirika decides to confront Grado's soldiers head on...”
—Opening Narration

Waterside Renvall is Chapter 7 of Fire Emblem: The Sacred Stones.

By this point, the player should be forming a small group of elite units who receive much of the experience in each chapter (Ross, Joshua, and Natasha are all good candidates for these positions). Eirika probably will not be in this group, but she should level up about every chapter to prevent her from falling behind (giving her the Boss to kill may help, her Rapier can take down some bosses rather easily, but it is not worth it unless you plan to go with her when you finish chapter 8)

Since Ballista have an incredible range and do triple damage to flying units (provided that they hit their targets), it may be a good idea to keep Vanessa out of this chapter. Neimi can take control of the Ballista just North of where the group starts, unless she is part of your "elite" group, in which case she should travel with them towards the castle.

The Elite group might change in every chapter, as some units may be tossed in because they have some sort of advantage on this level. In this case, Eirika should be in the group, and so should a high Defense character who can sit in range of the Ballistae and force them to run out of ammo.

If using mounted units (which are only Seth and Franz), you can use a target unit of high defense, like Gilliam, or quick units that can dodge the attacks, like Colm and Joshua, to draw the Ballista attacks towards that unit, then send your mounted units to take out the Archers using the Ballista or forcing them to run out of uses for the Ballista.

If you want to cut through to the center of the map quickly, you can do so with Colm and Pirate Ross, who are both capable of crossing river tiles. However, make sure that at least one of them can take an attack from at least one of the soldiers and the mage (if either unit is fast and/or strong enough to kill the soldiers, be prepared to take three attacks). Making use of Support bonuses will come in handy with this strategy.