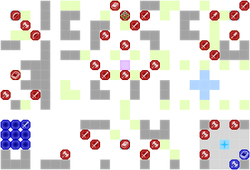 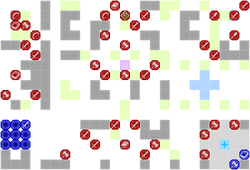 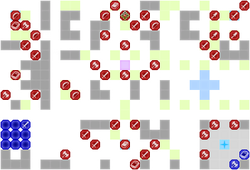 Byleth, Annette, Gilbert and 8 others

Chapter script
[view]
“In an attempt to help in the war effort, Annette goes to her uncles to ask for the Hero's Relic of House Dominic. Concerned about her safety, Gilbert accompanies her and advises that Byleth provide reinforcements should things go wrong.”
—Opening Narration

Weathervanes of Fódlan is Annette and Gilbert's Paralogue Chapter in Fire Emblem: Three Houses. This chapter takes place in Kingdom territory, and is only available on the Azure Moon route.

Gilbert is seen talking with Byleth, asking them whether or not they currently stand any chance of victory. Byleth unfortunately believes that victory is currently impossible, much to their dismay. While contemplating their next move, Byleth and Gilbert are suddenly distracted by the sound of Annette tripping over a barrel while running.

After getting up, Annette reveals Gilbert to be her father, much to the shock of Byleth. If Annette and Gilbert have not yet reached at least A-support with one another, the dialogue between them will be cold and dismissive. If they have reached A-support or higher, then their dialogue becomes much more doting and warm. Annette came to inform the Professor that she will be going away for a while, as she had hoped to go to her family's home to acquire the Hero's Relic of their house. Gilbert admits that doing so would be very helpful to their forces, but it is also very risky as House Dominic is currently under Empire control under pressure from Cornelia. Annette still believes that getting the relic is worth the risk, and also states that her uncle, Baron Dominic, is there and would not want to hurt her. After Gilbert continuously expresses doubt, Annette eventually decides to go off on her own to get the relic herself. Gilbert, knowing that doing so would be reckless, finally decides to go with her, but before doing so, he asks the Professor for help by waiting outside the region while they go to talk with Baron Dominic.

Annette and Gilbert attempt to persuade Baron Dominic to hand over the relic to them, but he refuses, stating that handing over a weapon to a person currently considered an enemy would result in his immediate annexation. Eventually, they see he has no intention of helping them and they decide to leave. However, before they can go, Baron Dominic takes them hostage, as he believes letting them go would invite accusations of collusion. He attempts to persuade Annette to give up the war and remain home with him and her mother, but she refuses, so he sends both her and Gilbert to a prison. Now trapped, Annette starts to worry, but Gilbert tells her to remain calm, as the Professor is waiting outside the region. If they do not return soon, the Professor and their units will come in to rescue them. After breaking into the region and rescuing Annette and Gilbert, they set their sights on Baron Dominic and take him down.

Defeated, but still alive, Baron Dominic willingly bequeaths the relic to Annette and Gilbert, stating that his fighting of them would make it unlikely that Cornelia would accuse him of colluding with the Kingdom. Before they leave, Baron Dominic asks his brother to promise that he will return to his family once the war is over, to which Gilbert accepts.

After returning to the monastery, the Hero's Relic of House Dominic is finally revealed: the magic hammer: Crusher. Gilbert stated that he knew beforehand that Baron Dominic would not give up a relic as powerful as this without a fight, which was why he was against going to get it initially. He states that House Dominic is just one of many houses who comply with the Empire out of necessity rather than loyalty, as doing otherwise would be suicide. He asks if the Professor will continue to help them in pushing back the Empire so the Kingdom will one day be restored, to which Byleth says yes. Annette promises to keep working to help them too, and runs off to do some more training, but not before tripping over a box along the way. Gilbert then asks the Professor to continue looking after his daughter as well before taking his leave.

The reinforcements that arrive are dependent on whether a player unit advances to the top half of the map or the four Fortress Knights guarding Annette and Gilbert are defeated. Only one of these can trigger.

If a player unit reaches the top half of the map:

They will appear north of where Gilbert and Annette are captured.

If the Fortress Knights guarding Annette and Gilbert are defeated:

They will appear scattered throughout the southern half of the map

During the battle, Gilbert and Annette will be held "hostage" in the far righthand corner of the battlefield. The four units guarding their escape will not attack unless one of them is attacked or if your units get too close to Baron Dominic. If either Gilbert or Annette are defeated in battle, you will lose.

It is recommended that you plow east with your main force to rendezvous with Gilbert and Annette before attacking the units or Baron Dominic. While Annette & Gilbert might be able to take the 4 guards on their own, killing all the guards will trigger a giant wave of reinforcements who will charge Annette, and this likely is not survivable. After your main force groups up and the four guards are defeated, you can set your focus on defeating Baron Dominic in order to win the battle, as well as possibly farming the drops from the units in the top-right and top-left corners of the map.