Professor at Khadein School of Magic

Chapter 7: The Scarlet Swordsman (Mystery of the Emblem)

Sage (Shadow Dragon and New Mystery of the Emblem)

[view]
“Hmm… It’s Khadein, lad. The land is not as you remember it. That fiend Gharnef seized power, and now he’s draped the city in darkness. I fear Khadein is doomed… I could not stay and serve him. So, I snuck out alone.”
—Wendell to Merric

Wendell is a playable character from Fire Emblem: Shadow Dragon and the Blade of Light, Fire Emblem: Mystery of the Emblem, and their remakes.

He is a Sage of Khadein who disdains fighting, as well as the teacher of Merric and Arlen. He fled his country to escape Gharnef's rule.

When Marth talks to Wendell he explains his ethical values and so joins Marth's army. He appears as an enemy in Chapter 5, and is recruited by Merric or Marth.

Wendell is generally considered one of the strongest characters available in the original game. Though his stats appear poor at first glance and his growths are mediocre, the only stat he truly needs is Speed, which is one of the highest base Speeds in the game at 14. At the time you obtain him, he is by far the fastest member of the army, and due to his incredibly high Weapon Level, he can wield every single non-Prf tome and staff at his base. This allows him to two-round or one-round almost every normal enemy in the game when given the proper tome, and with 22 HP and 8 Defense, he is surprisingly sturdy. Even Gharnef can struggle against him, if Wendell has Starlight; if Wendell gains even one point of Speed, he can double the Dark Pontifex. Combine this with the ability to heal, or wield powerful staves like Warp, and Wendell boasts excellent utility, combat skill, and versatility, exacerbated further by his very early joining time. In the late game, he may need a statbooster to keep up with fully-raised Bishops like Merric or stronger prepromotes like Gotoh and Boah, but he is never a bad unit to deploy, and can hold his own in the very last chapters as either a utility character or a magical powerhouse.

Wendel has fairly high base stats and passable growths. Additionally, his Staff rank makes him an excellent healer to use throughout the game, and at base, Wendell will able to use the majority of staves and tomes in the game. His growths may be easily altered by the use of the Starsphere or Starsphere Shards in the second book.

All in all, Wendell is an above average unit in both books.

Wendell has unusually high base speed, as well as great Tome and Staff Weapon Rank. Due to his early join time and base stats, Wendell is a very good character to use early in the game for support. He can use the powerful Excalibur tome at base, and is also one rank away from using the Warp staff (and is particularly close if reclassed to Bishop, though this comes at the cost of some Speed and Tome rank). If reclassed to Dracoknight, he will be an excellent combat unit thanks to his great speed, flight, and Dracoknight's fairly high strength base, even if his weapon ranks will suffer somewhat. Due to his poor growths and the presence of very strong enemies, Wendell's utility will eventually waver as your other units surpass him, meaning he is mostly useful later on as a spare staff-user, but even then, having a second or third character capable of using Warp is an option that is hard to discount.

New Mystery is Wendell's weakest incarnation, as the game very heavily favors units with high growths, which Wendell simply does not possess. While other versions could stay strong throughout the campaign, Wendell tends to struggle, particularly on Lunatic, to keep up past his join time. Fellow mages and staff units, such as Merric, Linde, and Marisha also have a much easier time of catching up to him. That said, the sheer versatility and supportive skills of his Sage class means that he is still a good idea to deploy in those chapters, even if he can be surpassed eventually. He can also stay useful somewhat longer, due to the existence of reclassing; one good potential option for him is Swordmaster, which makes good use of his high Speed and allows him to deal fairly heavy damage with a Levin Sword.

Wendell became the senior mage in Khadein and embarked on a journey that took him from land to land in pursuit of truth.

"Wendell returned to Khadein, as its Archmage, and spent all of his energy on restoring the City of Magic."

“Prince Marth, I am Wendell, a pontetifex of Khadein, city of magic. Our pleas for peace have failed, and Khadein has been taken over by one of the other pontifices. His name is Gharnef, and he and the many mages who swear alliance to him have allied themselves with Dolhr. Prince Marth, I ask you now: please lend me your help in thwarting his vile ambitions.”
—Recruitment conversation with Marth

Wendell is illustrated in the trading card game Fire Emblem Cipher with the following cards: 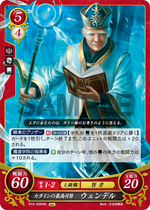 The name Wendell is a derivative Wendel, an old short form of Germanic names beginning with the element wandal meaning "a Vandal". The Vandals were a Germanic tribe who invaded Spain and North Africa in the 5th century. Their tribal name, which may mean "wanderer", was later applied to other groups such as the Wends, a Slavic people living between the Elbe and the Oder.

Wendell's name might refer to him taking various journeys in his life - as noted in his endings in games taken place during War of Shadows. 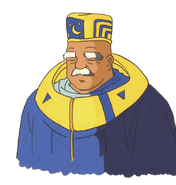 Wendell as he appears in fifth series of the TCG.

Wendell as a Sage in Fire Emblem 0 (Cipher).

Wendell's portrait in Shadow Dragon and the Blade of Light.

Wendell's portrait in Mystery of the Emblem.