What Happened to Corrin

What Happened to Corrin 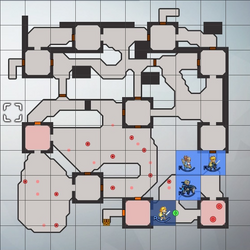 What Happened to Corrin (カムイの行方, lit. Kamui's Whereabouts) is the thirteenth chapter of Fire Emblem Warriors.

Both armies have been pushed back, but Ryoma and Xander are nowhere to be found. The party searches for them until nightfall before finding a pair in a nearby forest.

Along with your main lord, bring in Chrom and Lucina, and pair them up together. Have a fourth unit distract Ryoma and Xander, but don't let them fall if you are playing in Classic Mode. After you seize the S Field Fort, have Chrom and Lucina take the Warrior Tonic together. When Corrin is summoned, you can use their Dual Warrior Special to take her out. Then, go fight Iago. When Iago is half dead, he will retreat and return. When that happens, Ryoma, Xander and Corrin will join your team. Send 3 units to protect them, and play as one unit so you can defeat the Mages and Iago.