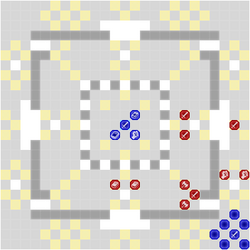 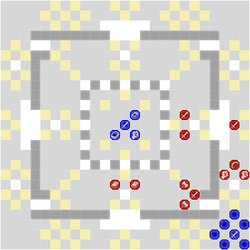 What Lies Beneath/Script
[view]
“Launching small counterattacks on the surface won’t accomplish anything. It could also earn us the scorn of the church, if it gets messy...which it will. That’s why we have to lure the enemy underground before we take them out. I know the perfect spot.”
—Yuri

What Lies Beneath is the second chapter of the Cindered Shadows side story for Fire Emblem: Three Houses.

After exploring Abyss and speaking to some of its residents, Yuri asks Byleth and the students to join him in ambushing the attacking mercenaries. Yuri has a plan to lure the mercenaries deeper into the caverns to an arena he recently discovered, so that they can fight away from the homes of the Abyssians. He warns Constance not to go overboard with her magic and Hapi not to summon any monsters, lest the arena collapse and take Abyss with it. Anything too disruptive could also cause trouble for their patron Aelfric, a Church of Seiros higher-up who opened Abyss to the people living there and helps protect and care for them. The Ashen Wolves are concerned since the church has been on less friendly terms with Abyss as of late, and so any undue attention could make Aelfric's job harder.

The surface mercenaries are successfully lured into the area, but the unrelenting tide of reinforcements from every direction nearly pushes the new team to their limits. To make matters worse, the Death Knight finds his way down into the arena and targets anyone who gets in his way. Just as they think they've cleared out all the enemies, an assassin appears and targets Yuri, but Aelfric warps in and saves him.

The Ashen Wolves thank Aelfric for his assistance and he introduces himself to Byleth and the other students. He explains more about the precarious situation in Abyss, and asks Byleth if they would consider taking the Ashen Wolves as students under their wing. Having heard much about Byleth and having known Jeralt and Byleth's mother many years ago, he trusts Byleth to be a good professor for them. He also offers to tell stories about Byleth's parents anytime Byleth would like learn more.

During the battle preparations screen, you automatically gain access to the four students of the Ashen Wolves:

Additionally, when exploring Abyss, the player can set unit appearances if they go to the Male/Female Quarters, depending on Byleth's gender.

Defeating the Death Knight is not necessary to complete the chapter, but will net you a Crescent Sickle.