-
[view]
The Wight (ヘルボーン Herubōn, lit. Hellbone in the Japanese version), sometimes called Lich, is an enemy-only Monster class that first debuts in Fire Emblem Gaiden. Reanimated skeletal corpses, usually of humans, driven by terrible magic, Wights, like their unpromoted counterparts, are capable of wielding a variety of weapons, including Swords, Lances and Bows. Wights are designed with a few ripped and tattered pieces of cloth draped over their skeletal bodies, most likely relics from their time as members of the living realm.

In their original inception in Gaiden, Wights are known as Lichs (リッチ Ricchi). The promoted form of the Skeleton class, Lichs are notorious for being harder to kill. Ten of these creatures appear exclusively in one fight during the course of the game, during which Alm is tasked with the mission to eradicate them.

In The Sacred Stones, Wights are the promoted form of the Bonewalker class. Clearly stronger than their unpromoted counterparts, Wights feature skeletal frames daubed a deep shade of purple. Like the Bonewalkers, Wights are capable of wielding a variety of weapons, including Swords, Lances and Bows, although the maximum weapon ranks they can achieve are doubtlessly superior. Wights are commonly found in the Lagdou Ruins and monster skirmishes that break out in Melkaen Coast.

Wights return in the remake of Gaiden, Echoes: Shadows of Valentia. Wights can now use both swords and the monster weapon, clubs. Wights have been redesigned to resemble demon skeletons, having a single eye-socket in the middle of their skull and horns.

In The Sacred Stones, Wights are split into two distinct types: the melee and the ranged varieties. The former type functions similarly to Heroes, but oddly have bases and caps that are more comparable to those of a slightly-weaker Sniper. While they have a poor Strength growth, their respectable base Strength makes up for this deficit. The defenses boasted by Wights are not particularly stellar, and their Speed is often poor enough to allow them to be doubled by units of comparable levels. Nonetheless, like Bonewalkers, Wights come with a myriad of weapons so players should check what weapons they're using to prevent unnecessary damage and looting them if possible.

Ranged Wights, on the other hand, are virtually identical to Snipers, and can be handled in much the same way. Unable to ride ballistae, these come into play at a point where the player most likely already has access to the Fili Shield, and are often equipped with mediocre weapons. All things considered, they are flawed opponents that can be effortlessly taken out by units with high Defense. Their ability to attack melee units without being countered is an annoyance, however, especially given the numbers they attack in. Hand Axes and Javelins can help clear them out quickly.

In Middle and Old English, the term "Wight" is one word for 'man' or 'knight,' or simply for a person or living thing, used most often in alliterative poetry such as 'Sir Gawain and the Green Knight.' As an adjective, the term meant 'brave' or 'knightly.' In recent fantasy media, the word 'wight' has been used in works by authors such as J.R.R. Tolkien and George R.R. Martin to denote undead monsters.

"Lich" is an Old English word for corpse. In literature and other media, liches are usually depicted as undead sorcerers with decaying or skeleton-like bodies who cheated death with their dark magic.

Generic class portrait of a Wight from The Sacred Stones. 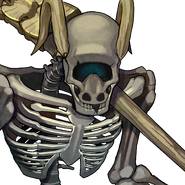 Generic class portrait of a Wight from Fire Emblem Echoes: Shadows of Valentia 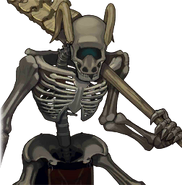 Generic class portrait of a Wight from Echoes: Shadows of Valentia.

Village sprite of a Wight from Echoes: Shadows of Valentia. 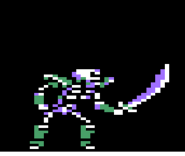 Battle model of the Lich class from Gaiden.

Attack animation of a ranged Wight from The Sacred Stones.

Attack animation of a Wight landing a critical hit on Gerik.

Map sprite of the Lich class from Gaiden.

Map sprite of the Mail Skeleton class from TearRing Saga.