Archer
[view]
“Shall I join the battle this time, Mark? I can’t wait! Ah, this brings back memories, doesn’t it? Kind of like we’re back with Lyndis’s Legion again. OK, Mark! Guide my arrows true!”
—Wil’s conversation with Mark in Hector Mode’s Chapter 21

Wil is a playable character from Fire Emblem: The Blazing Blade. He is a Pheraen archer who joins Lyndis’s party in the Taliver Mountains.

Not much is known of Wil when he lived in Pherae with his friends Rebecca and her brother Dan. At one point of time, both Will and Dan considered being mercenaries, and they thus set off to fulfil their dream, leaving Rebecca behind. They traveled for about a month before Dan got homesick and split up with Wil.

Left astray in Badon, Wil wandered aimlessly before arriving in a village in the Taliver Mountains, being attacked by the bandits of the region. A cry calls out asking who lives in the village, and Wil answers it, thereby meeting Lyn and her troops for the first time. Learning of their battle with the bandits, Wil joins up with the group and fights them off, later joining them as he had nowhere else to go. Wil then aids Lyn in her battle against Lundgren, thereafter becoming a soldier of Caelin.

A year later, Wil is one of the few survivors of Caelin’s occupying garrison, along with Kent, Sain, and Florina, driven out by Darin’s forces when they laid siege to Caelin. Eliwood and Hector arrive on the scene in the nick of time, and together they retake Castle Caelin. Wil then travels with the group as they quest to defeat Nergal and his Morphs.

Following the successful retaking of Castle Caelin, Wil joins Lyn in her decision to accompany Eliwood and Hector on their journey. At the end of this journey, Wil becomes the commander of Caelin’s archer division. Depending on his supports, Wil can marry Rebecca, thereby becoming the father of the Pheraen archer Wolt from The Binding Blade.

Wil is best described as a cheery and optimistic person, treating most, if not all, of his companions as friends at the cost of formalities, something that Kent tries to mend during his tenure in Caelin. He has an outgoing and extroverted personality, though at times it inadvertently causes him to irritate others, especially in the case of aloof characters like Rath and Raven.

Wil is also noted as stubborn, mainly by Dart, who refuses to acknowledge the archer at first when he recognizes the pirate as Rebecca’s lost brother, Dan. However, he can also be serious and protective of those he cherishes, as is the case when he defended the villagers from marauding bandits before meeting Lyn.

Description: A youth from Pherae, in the Lycian League. Very social.

*Only item on Hard Mode

Note: His stats will always carry over from Lyn’s Mode, should he have been leveled up previously. Otherwise, if he was killed at any point in Lyn’s Mode, or if the mode was skipped, then these are his default stats.

Of the usable cast in Lyn Mode, Wil is generally seen as one of the weakest characters. This is largely due to two factors: his low base stats, and his Archer classline. Wil has some of the worst bases of any combat unit, which makes his ability to take down enemies very limited, and while his growths are not terrible, they also are not sufficient to redeem his starting point. With only 5 base Speed and a 40% growth, Wil takes a very long time to start doubling all but the slowest enemies, and his durability, though better than fellow archers like Rebecca or staff units, is not enough to let him survive unsupported.

Furthermore, there is very little reason to use an archer in Blazing Blade. The traditional niche of one - killing flying enemies - is not a niche Wil performs well in, since bows only have x2 effectiveness. Unless Wil can double a flier, which, as mentioned, is not likely, he will not be able to kill them. His ability to deal ranged chip damage is fairly pointless, as in Lyn Mode, most threats will die to anything, and when he rejoins in other modes, the sheer power of units like Marcus, Hector, trained cavaliers like Sain, Kent, and Lowen, a trained Florina, or Oswin can fight without his help. His niche is further compromised by the strength of the Hand Axe and Javelin, which allow other units to attack at range without compromising their melee prowess on enemy phase. Wil, by contrast, is mostly a sitting duck on enemy phase, and due to his inability to counter, enemies will prefer to target him, which is not a good thing in maps with high enemy density like Dragon's Gate or The Port of Badon.

If the player is determined to use Wil, though, he is not irredeemable by any stretch. On Hector Hard Mode, he is actually quite helpful on his joining chapter, as his starting position will usually see him and Lyn's fellow retainers be mobbed by Pegasus Knights; while Wil cannot one-round them, he can do fairly hefty damage and enable Sain or Kent to finish them off (this is particularly useful if the player has not played Lyn Mode, as Sain, Kent, and Lyn are distinctly underleveled otherwise). His Speed is mediocre, but fixable, particularly if he can be promoted to Sniper, and if he can start doubling, he will usually get kills. He forms a support triangle with Rebecca and Dart or Raven, which is quite helpful. Lastly, while he is likely the lowest-priority character for XP in Lyn Mode, he is still available then, and if he can reach around level 6 or so, he should at least not be a liability in higher difficulties.

“Lyn, Mark. I’m no use to you in this condition. Forgive me. I have to retreat.”
—Wil

With his cheery outlook and his happy-go-lucky demeanor, Wil has become quite dear to Marquess Caelin’s household. Kent is teaching him manners befitting a sworn man of Castle Caelin.

Wil remained a knight of Caelin even after Ostia took over. He became the commander of Ostia’s Caelin archer division.

After their journey, Rebecca continued to work for Eliwood and became his most trusted retainer. Her childhood friend, Wil, joined her in service to Pherae. The son they later had shared their archery skills.

Wil is illustrated in the trading card game Fire Emblem Cipher with the following cards: 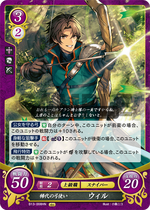 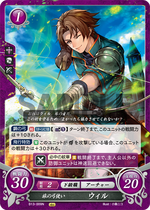 Wil as a Sniper in Fire Emblem 0 (Cipher).

Wil as an Archer in Fire Emblem 0 (Cipher).

Wil's battle sprite as an Archer.

Wil's battle animation as an Archer.