The Wind Mage (ウインドマージ Uindo māji) is a combat magical class that is introduced in Fire Emblem: Genealogy of the Holy War. This class is one of three split branches of the original Mage class, solely wielding Wind magic as its weapon of choice.

In its original inception in Genealogy of the Holy War, the Wind Mage class is a variant of the classic Mage class that specializes in Wind Magic. This version of the class promotes into the Mage Fighter class.

The splitting of the Mage class is not repeated again until Radiant Dawn, where the standard Mage is replaced instead by the Fire, Thunder and Wind variants. This version of the Wind Mage ( Uindo māji) class promotes into the Wind Sage class, and can further promote into the Archsage class when the necessary requirements are met.

In Genealogy of the Holy War, as a trade-off for their lack of versatility, Wind Mages can use B-rank Wind Magic (ignoring holy blood bonuses) instead of the usual C-rank limit for generalist Mages. The only recruitable Wind Mage is Amid, who can be promoted to the Mage Fighter class upon reaching level 20.

In Radiant Dawn, there are no playable Wind Mages, as Soren is already a Wind Sage in that game. It is therefore considered to be an enemy-exclusive class.

Amid - Arthur's substitute character and the brother of Linda.

Concept artwork of the Wind Mage class from Fire Emblem: Genealogy of the Holy War. 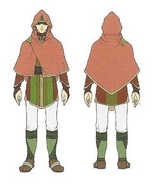 Concept artwork of the Wind Mage class from Radiant Dawn.

A Level 1 Wind Mage, as he appears in the first series of the TCG.