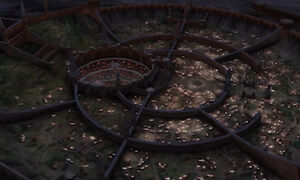 Windmire is the capital of the Kingdom of Nohr in Fire Emblem Fates. Located deep within Nohr's northwestern territory, southwest of the Northern Fortress, the city is ringed by a series of circular walls. At its heart is a vast, excavated pit that holds Castle Krakenburg, the home of the Nohrian royal family. During the events of Fates, King Garon directs the Nohrian war effort from Windmire.

Explained in Birthright, Corrin notices that nobody's roaming the streets, quite unlike in Hoshido, to which Ryoma states that he finds it hard to believe that Windmire is the capital city of a major kingdom. Silas states that Windmire has been like this for quite some time as most civilians stay indoors so they won't be harassed by brigands or Faceless; he then reveals that the Nohrians live like the trees in the Woods of the Forlorn on limited resources, thus forcing Nohr to have to learn to fight and conquer other countries to prosper, to which Ryoma states he had no idea of this and vows to share Hoshido's plentiful resources upon his ascension to the throne.

In Chapter 22, Corrin and their forces arrive at Windmire and find it oddly deserted. Shura appears and tells the group that he and his men will kill them unless they give up their weapons, especially the Yato Corrin is carrying. After he is defeated, Azura asks him if he knows about a secret tunnel into the castle. He refuses to tell them unless the group gives him money, which Ryoma is prepared to do when he says that he is the Crown Prince of Hoshido. Surprised at the turn of events, he tells Ryoma that his family served the royal family until his principality was taken over by Mokushu and pledges his efforts to help him out. In exchange, Ryoma promises to help him reclaim the land his people once had.

After the battle, it is revealed that Shura had kidnapped Azura through the secret tunnel that she mentions to him, although she is unaware of her kidnappers. He is surprised to see how strong she has become after all those years. On the way down the secret path, they find themselves in an underground market, which Ryoma and Corrin compare it to the ones back home. Shura explains that this is how Nohrians live, and states that only "rich idiots and foreigners" venture on the surface.