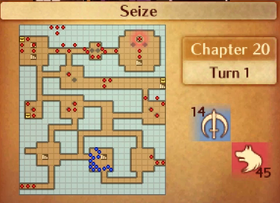 Chapter script
[view]
“Passing through the mountains, the group next encounters the Wind Tribe. Corrin tries to convince the tribe's leader to let the group pass without fighting.”
—Opening Narration

Winds of Change (風の村の覇者 Kaze no Mura no Hasha lit. The Champion of the Village of the Wind in the Japanese Version) is Chapter 20 of Fire Emblem Fates in the Conquest Version. This chapter takes place in the Wind Tribe Village.

In this chapter, the unique mechanic of the map is the winds that blow throughout castle Reppu. The winds blow either up or down. Any of your units caught on the winds will be blown 5 tiles up/down respectively at the end of the enemy's phase. However, if the winds blow the unit into an invalid tile (e.g emptiness for ground units, or another unit is on the resulting tile), they will be blown to the nearest eligible tile instead.

Therefore, the player must be extremely careful with where their units are placed, as one mistake can get them sent flying deep into enemy lines and getting killed. Fliers can be used, but the winds and multiple bow users on the map make it dangerous for them.

On Lunatic Mode, almost all of the ground units will have a random Seal skill, which can be problematic if they are not taken down in one turn. In addition, Hayato will come with a Hexing Rod, which can cause more grief due to the winds that blow every turn. Several of the Priestesses come with various staves, such as Silence and Freeze, so try to deplete their charges quickly so your more powerful units can go in without getting affected.

There are several chests on the map; however, due to the nature of the winds, it is best to take out all of the hostiles first before attempting to loot them.

The Dragon Vein is scattered several areas across the map; each one is a one-time use which sends all units in the wind's path in the respective direction. It is highly recommended to use them, especially on Lunatic to push Hayato further away from you so that he can be dealt with later, as he does not move. Displaced enemies will quickly try to get back into their original positions, so they should be taken care of quickly before they return.

This chapter contains both positional and turn-based reinforcements

The wind blows in this cycle, you can use this to determine your path of action, and what comes after it. Preventing bad positioning is essential in this map for higher difficulties. (There are 5 columns, x x x x x)