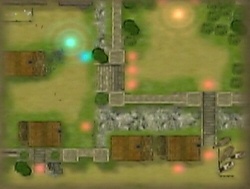 Heather (talk with Nephenee or Brom)

Chapter script
[view]
“Queen Elincia encounters and defeats a wing of Begnion dracoknights trespassing in Crimean skies. After rescuing Chamberlain Nealuchi and Princess Leanne, she invites them to be her guests at the royal court. While Elincia's show of loyalty to her laguz allies causes an uproar among the nobles at court, they are aware that the heron princess is under the mutual protection of the mighty laguz hawk king and raven king. Because of this, there is no public show of distaste.
However, dissatisfaction with Elincia's rule now spreads from a single faction to a larger group. Crimea's unity is slowly rotting from within. This discord begins to be felt even in country hamlets like the farming village of Ohma.”
—Opening Narration

Some of the enemies in this chapter will be volunteers, you get bonus experience for each one that survives.

Heather appears from the southeast on Turn 5. She can be recruited by talking with Nephenee or Brom.