Teleportation
Conjure (FE2)
Shadowgift (FE14)
Witch's Brew (FE14)
Toxic Brew (FE14)
[view]
The Witch (魔女 Majo) is a combat magical class that is introduced in Fire Emblem Gaiden. Wielding offensive magic as its primary weapon of choice, the Witch class is renowned for its ability to teleport from one point to another in any given skirmish.

The Witch class was originally an enemy-only class that debuted in Gaiden. In that game, Witches are powerful female magic units with Black Magic as their sole weapon of choice. They are most noted for their use of the Teleportation ability. Witches also have the ability to summon more Witches. However, like most other summoned enemy reinforcements, should the original Witch be killed, the reinforcements will also fall.

The Witch class also appears in TearRing Saga: Utna Heroes Saga. Witches in this title can wield all types of Anima magic alongside Dark magic and are also uniquely granted the ability to Warp. While almost all of the Witches in this game are enemy units, Sherra acts as the exception, making the decision to enlist in the player's army after saving Shigen's life.

The Witch class is reintroduced into the series with the onset of Fates, where it can be accessed by all female units through the usage of DLC-exclusive Witch's Marks. Much like its predecessors, the Witch class is again imbued with the abilities to use Dark Magic and Warp, learning the skills enabling them to do so when necessary requirements are met.

In Fire Emblem Echoes: Shadows of Valentia, the Witch class is given a background. According to Lukas and Saber, Witches are women whose souls have been offered to Duma, either willingly or by force. While the Witch gains unrivaled magical prowess, their souls are ripped from their bodies, becoming nothing more than hollow husks with the sole purpose of serving Duma. The process of becoming a Witch seems to have various degrees as Delthea was brainwashed and nearly turned into a Witch, but was able to return to normal once Tatarrah was killed. However, once a woman has fully become a Witch, there is no possible means to restore them other than to kill them. In their deaths, it seems that their soul temporarily returns to their bodies before they expire.

Witches possess the highest capped Magic out of any magic-wielding class in the game, having one more point of Magic than the Sorcerer, and having 3 more Magic points than Onmyoji. Like Sorcerers, Witches are capable of obtaining an S-Rank in Tomes, allowing them to use the coveted Excalibur tome. Their innate critical bonus and slightly higher Skill and Speed as compared to Sorcerers make the Witch class immensely attractive, while having slightly subpar defensive capabilities. The Witch class's superior Magic and Speed allows them to overpower most enemies that come their way, alongside avoiding enemy onslaughts reliably.

The four class skills that Witches are able to learn include Shadowgift, Witch's Brew, Warp and Toxic Brew.

Shadowgift is learnt at Level 1, allowing Witches and other non-Dark Mages/Sorcerers to use Dark Magic. Currently, however, Nosferatu is the only tome considered as such in Fates, thus making this skill less useful than it was in Awakening. Nonetheless, Witches' devastatingly high Magic ensures the HP drain from Nosferatu to be worthwhile, even if its inability to perform follow-up attacks could be considered a waste of the class's high Speed.

At Level 10, Witches learn Witch's Brew. This skill employs the user's Luck to randomly obtain a potion item during the first 7 turns. The skill is particularly useful when the player engages in Multiplayer battles, during which the convoy is inaccessible.

At Level 25, Witches learn Warp, a skill that is not just unique to them, but is possibly the most useful skill that they have unique access to. The Warp skill allows its user to teleport themselves to any space located adjacent to ally units and thereafter take another immediate turn of action. A particularly useful strategy that one can consider is to combine Warp with Galeforce; after defeating an enemy unit, the user, assuming they were unsupported in battle, will be able to Warp back to safety. The strategy can also be utilized to reach out towards struggling allies, whether it be through Attack Stance, Dual Guard, or, if the user has reclassed into a class capable of using Staves, heal. Keep in mind that Warping to an ally, attacking, and then Warping back will not work, as Galeforce only activates when its user is unsupported. As ally units positioned adjacent to each other are considered to be supporting each other regardless of whether they perform any actions together, Galeforce will therefore not be triggered and the player will turn not be able to further exploit Warp.

The final skill Witches learn, Toxic Brew, is learnt at level 35. This skill is triggered by its user's Skill, freezing opponents and reducing their Avoid by 20 for 1 turn when activated. It is particularly useful for stopping powerful enemies, but if the user is formidable enough, they may kill the enemy before giving the skill a chance to activate. The only way to prevent this is by using a weapon that cannot perform double attacks, such as Nosferatu or Ink Painting. Toxic Brew works best when the user attacks from a distance.

On the whole, Witches can be considered a magical glass cannon, being able to unleash extremely powerful magical attacks against their foes and withstand hostile magical onslaughts. However, they are immensely vulnerable to physical attacks, and all it takes is for at least one or two of such attacks for the Witch to be felled, but they will evade reliably thanks to a really good Speed stat, It is thus recommended that at least one female magical character is reclassed into it.

* As enemies in Gaiden only; Sonya and Delthea are Mages otherwise.
**In Shadows of Valentia only.

***In Shadows of Valentia; Cutscenes only

Concept art of a Witch from Fates

Concept artwork of the Witch class from Echoes: Shadows of Valentia.

Shade as a Witch in Fire Emblem 0 (Cipher). 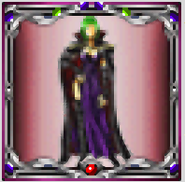 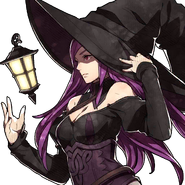 Generic class portrait of a Witch from Fates. 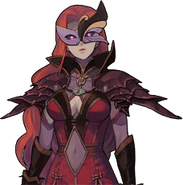 Generic class portrait of a Witch from Echoes: Shadows of Valentia.

Battle model of the Witch class from Gaiden. 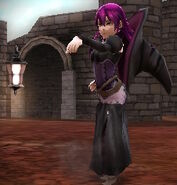 Battle model of the Witch class from Fates.

Battle model of the Witch class from Echoes: Shadows of Valentia.

Map sprite of the Witch class from Gaiden.

Map sprite of the Witch class from TearRing Saga.