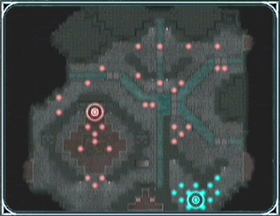 Chapter script
[view]
“During the battle for Talrega, Ike and the rest of his company come to a bleak realization. Wherever the Crimean army marches, the land becomes a battlefield. The damage is immense. Warfare and floodwaters claim homes, crops, and hope. Villagers seeking shelter and safety stumble blindly through the snow. To them, there is no doubt that the Crimeans are an invasion force. However, the Crimeans have their own homeland to save. Focused as they are on that overriding goal, they cannot stop even to help the innocent victims of war. The only way they can help the people of Daein is to keep marching. The faster they reach Daein's capital of Nevassa and put an end to the war, the better for everyone.”
—Opening Narration

Without a King is Chapter 21 of Fire Emblem: Path of Radiance.

There are many doors and chests in this chapter, so it is recommended to bring a thief and door and chest keys if you have any. When you start you should split your units along the two paths to deal with the enemies in front of you. Kasatai, the mini-boss of this chapter, waits for you at a bridge with a Brave Lance. Kasatai is a General with Wrath who may deal some real damage if the player is not careful. While your main force is fighting the enemies, your thief should be looting the chests. When you open the doors some of them have enemies inside waiting so have a unit or two deal with them. Be careful where you position your units as there is a enemy unit with Sleep that can stop your unit in its tracks while enemy units come to attack it. When you come near the left part of the map Tauroneo, a General, comes to attack you. He has very high strength so the player must be careful. He can be recruited by talking to him with Ike. After you get to the throne, Ena is waiting for you. Ena has 26 defense and resistance so you should bring weapons that deal extra damage to dragons or laguz or else you will do almost nothing to her. She has only 1 range so ranged units can attack her without fear.

In the North American version, in the dialogue between Petrine and Ena, before Ena realizes that she is charged with defending the capital, she (who assumes that Petrine will defend the capital) tells Petrine that Sir Bryan will aid her. However, there is no known character in the series named "Bryan" (not counting Brian). This is most likely a translation error: she was probably referring to Bryce.