The Wo Dao is a Sword that debuted in Fire Emblem: The Binding Blade.

In Fire Emblem: The Sacred Stones, the Wo Dao was replaced by the Shamshir, which has the same functionality and similar restrictions. In Fire Emblem Heroes, it gains axe and lance equivalents in the form of the Wo Gùn and the Harmonic Lance respectively.

The weapon also makes an appearance in the spin-off title Fire Emblem Warriors as the personal weapon of Navarre, found in his personal History Mode map within the Shadow Dragon DLC pack A Brush in the Teeth.

Wō dāo (倭刀) is a Chinese term that literally translates to "Japanese Sword". These blades were principally employed as the weapons of choice by the Chinese during the Ming Dynasty, where they were said to be heavily influenced by the intricacies of Japanese sword designs. 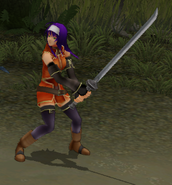 Mia wielding the Wo Dao in Radiant Dawn.