Chapter 18: Battle of the Pass (Mystery of the Emblem; joins in Chapter 19: The Last Decisive Battle in the remake)

Horseman
[view]
“The Wolfguard's strength is not mine alone. It also belongs to Sedgar, my assistant in the battlefield. As well as Vyland and Roshea... And more than anything, it belongs to Coyote... Because he was with us.”
—Wolf, in a base conversation with Kris in New Mystery of the Emblem.

Wolf is a playable character from the Archanea Series of Fire Emblem. Formerly the leader of the Aurelian Knights serving under the banner of Hardin in Shadow Dragon and the Blade of Light, Wolf establishes and captains an elite force that is known as the Wolfguard, comprising of Roshea, Vyland and Sedgar, after the end of the War of Shadows. Amongst the members of the Wolfguard, Wolf is particularly close to Sedgar, whom he refers to as his assistant on the battlefield.

A member of the people residing in the plains of Aurelis, Wolf was captured and made a slave to the aristocracy. He was, along with his fellow kinsmen, later liberated when Hardin assumed the leadership of the country from the former King of Aurelis.

Some time after being freed from slavery, Wolf, alongside Roshea, Vyland and Sedgar, made a collective vow to devote their lives to serving Hardin, thereafter swearing fealty to him.

Shortly after the Dolunian Empire began spreading its influence over the continent of Archanea, Aurelis is, after being besieged by a troop of Dracoknights led by Princess Minerva of Macedon, forced to cede much of her territory to the Empire.

Upon learning that a cluster of villages in an unnamed district of Aurelis is under harassment from bandits in Episode 2, Hardin leads Wolf and Roshea to the vicinity in a bid to restore order to the region. Later combining their might with Minerva and the Whitewings squad, the group manages to quell the bandit uprising by felling Ruben, the main orchestrator of said uprising. Throughout the entire skirmish, Wolf maintains a respectful silence, preferring to permit his liege to handle the talking. After Hardin briefly cedes praise on Minerva for her combat prowess, Wolf hastily departs with him and Roshea.

By the time the events of Shadow Dragon and the Blade of Light come around, much of Aurelis has been dominated by the Dolhr Empire. Hardin, leading the rebellion army opposing the Dolhr Empire, refuses to bow down to the enemy, gallantly executing his duties without falter. Wolf, alongside his fellow subordinates, including Roshea, Vyland and Sedgar, bravely elects to maintain his loyalty to his liege by continuing to struggle by his side. As Marth's army approaches the Northern Fortress of Aurelis in Chapter 5, on Hardin's exuberant command, Wolf heads out with his comrades in order to rendezvous with it. Having been reinforced by the might of Marth's army, the knights of Aurelis are able to successfully purge their country of Dolhr's presence. Wolf, under the order of his liege, proceeds to aid Marth in bringing the War of Darkness to a conclusion with his comrades thereafter. Following the end of the war, Wolf establishes and assumes the helm of the Wolfguard, taking Roshea, Vyland and Sedgar as his subordinates, where they pledge to fight for Hardin and reinforce his ideals unquestioningly.

Wolf reappears in Chapter 18 of Book 2 of Mystery of the Emblem, where he commands the Wolfguard to ambush Marth's army as it attempts to pass through the Adria Pass and gain access to the palace of Archanea. After Marth parleys with the King of Aurelis in a village located in the vicinity, however, the ambush is called off, and Wolf is instructed to retreat with the Wolfguard.

After retreating from the battle of Adria Pass, the Wolfguard, with the exception of Roshea, makes the joint decision to head over to Archanea and bolster the main force of its army, intending to protect Hardin from the impending assault of Marth's army in Chapter 19. Amongst the group of four comprising the Wolfguard, Wolf is the last to be convinced to defect to Marth's army after a heated exchange with Sedgar, during which he is reminded of the day of his inauguration as the commander of the Wolfguard, where Hardin urges him to lead him back onto the path of righteousness should he fall into corruption. Wolf then helps Marth to defeat Hardin in the next chapter and thereafter draw the War of Heroes to a conclusion. After the war, as a result of his inability to overcome his grief at the death of Hardin, Wolf will blindly throw himself onto the battlefield with wild abandon, almost as if he desires to end his life.

Similar to many other knight characters appearing in Shadow Dragon and the Blade of Light and Mystery of the Emblem, Wolf is passionately loyal to the liege that he serves, although his loyalty is one that is of an acutely extreme quality; in a bid to uphold the pledge of allegiance he has sworn to Hardin, he is more than willing to overlook the crimes that his liege has wrought upon the continent under the Darksphere's influence. His heated outburst at Roshea in Chapter 18 after the latter expresses woeful doubt over the allegations that posit Marth as a man of diabolical ambitions proves as much, as he practically screams when he vehemently denies that Hardin is a liar capable of resorting to deceit.

It is later revealed that Wolf's repeated outbursts of irrational fury with regards to his loyalty to Hardin is but a coping mechanism, through which he denies the reality that the man whom he looks up to as both a figure of valour and his saviour had been warped into a treacherous being beyond recognition and must pay for his crimes through death. This is hinted through his recruitment conversation with Sedgar in Chapter 19; after Sedgar reminds him of Hardin's request to be led back to the path of righteousness in the event that he strays away from it, Wolf's response, where he dazedly acknowledges that the "time has come... [to] defeat Coyote...", betrays the fact that he has always been aware of the drastic transformation that his liege had undergone, contrary to the blindness that he has displayed prior to this exchange.

Additional dimensions are added to Wolf's character through his base conversations with Kris in New Mystery of the Emblem. For one, it may be observed that he is an individual who does not warm up to strangers very easily, and is especially hostile and condescending to those whom he considers to be beneath him. When faced with people who temper their strength for the sake of protecting the lives of their lieges, however, Wolf humbly acknowledges them with respect, as he considers them to be projections of his own loyalty to Hardin. This is the case during his second conversation with Kris, where he apologises for his initial rudeness after carefully observing that their formidable combat prowess is the result of their desire to protect Marth.

The final conversation that Wolf shares with the female Avatar reveal him to be quite a sentimental person; when she quips him on how he remembers his motherland, he fondly describes it as one that is defined by "wide, endless grasslands", "flowers of all colors" and "a cool breeze blowing", before requesting her to accompany him on a tour of the Lea of Aurelis.

Wolf makes for a very decent Horseman; his greatly improved growths allow him to function as a superb Hero, General, or Berserker, should he be reclassed. A downside to using him is that he is in a promoted class and has low bases, hampering his ability to fully harness his growth rates. Wolf generally winds up with slightly lower stats than Sedgar, but is a powerful unit to use nevertheless.

If you deploy Wolf as a General in chapter 8, Port Warren, you can send Wolf up to the upper two areas. He will have just enough defence to avoid taking any real damage him. In addition, with all the respawning enemies, you can raise Wolf up to level 11 or 12 without much trouble.

Wolf appears to be functionally identical to Sedgar, with only minor leads in Strength, Speed, and Defence. Symptomatic of a Wolfguard unit, his superb growths are undermined by his low base stats, the fact that he is a high-level promoted-class unit, and late recruitment.

"He remained with the Aurelian Knights, and worked tirelessly to restore the nation."

"Wolf remained a knight of Aurelis. He helped rebuild, and later captained an elite force called the Wolfguard."

"After the war, Wolf set his sights for Aurelis. As if searching for death, he threw himself recklessly into battle, one after the next..."

Sedgar: Wolf! Hold your fire!
Wolf: Sedgar! What are you doing?! So you've chosen to betray Coyote?!
Sedgar: No, it's not like that! This is for Coyote's own good! Something's wrong with Coyote. Even you must know that!
Wolf: That changes nothing! I will die at Coyote's side! I swore as much! Though all of you might betray us. Though I might be alone. I will not abandon him!
Sedgar: Even though you disobey his heart?
Wolf: What do you mean!?
Sedgar: Wolf, do you remember what Coyote said to you, the day you became commander of the Wolfguard?
Wolf: ......!
Sedgar: "If I should wander from the path of the righteous, please... lead me back onto it." That's what he said.
Wolf: I should never have forgotten. The words of Coyote himself... But, to tell me that time has come... That we must... That we must defeat Coyote...
Sedgar: We have to remind Coyote of the day we swore allegiance to him. No matter how painful it may be... That is our only recourse. I never wanted to believe it would come to this...
Wolf: Enough, Sedgar! For goodness sake... It would have been better had I died at Adria Pass... I am the commander of the Wolfguard... The life that Coyote gave me... I will not waste it. Even if that should lead to Coyote's death...

“The leader of Aurelis Knights, Wolf, is here for your head!”
—Wolf's boss quote in FE3.

Wolf is illustrated in the trading card game Fire Emblem Cipher with the following cards: 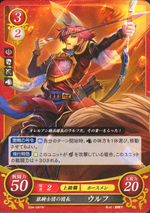 Official artwork of Wolf, Roshea, Sedgar and Vyland from The Complete.

Artwork of Wolf in Fire Emblem 0 (Cipher) by Nekobayashi.

Wolf, as he appears in the fifth series of the TCG as a Level 10 Horseman.

Wolf as a Horseman in Fire Emblem 0 (Cipher).

Wolf's portrait in Shadow Dragon and the Blade of Light.

Wolf's portrait in Mystery of the Emblem.