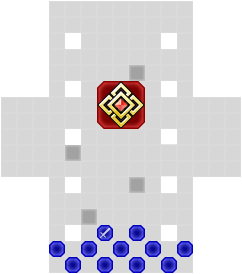 Wolf Pack is the seventh and final chapter of the Cindered Shadows side story for Fire Emblem: Three Houses.

Rhea tries to get Aelfric to stand down, but he flees to the cathedral and attempts to finish the ritual with his own blood. The ritual fails catastrophically; Aelfric and Sitri's corpse are absorbed by the Chalice and transformed into a horrific monster called an Umbral Beast. Rhea orders Byleth and the students to take down the Umbral Beast after being informed that its roar is attracting monsters to the monastery.

After the battle Rhea explains that Sitri gave up her very own heart to Byleth to ensure their survival. She arranged a fake funeral and instead placed her body in the Abyss, instead of underneath the dark, cold soil. Yuri explains that Aelfric founded the Ashen Wolves House 15 years ago, while he only found Sitri's body 10 years ago, suggesting he may had meant well at first.

Rhea then reveals that she is disbanding the Ashen Wolves house, though the Abyss will remain and the Ashen Wolves members may stay there if they desire to. Constance decides to go back to the Fhirdiad Royal School of Sorcery, Hapi will go back to visit her family, Balthus goes of to make money to pay of his debts and Yuri will take some time to think, and to take care of the people back in his hometown.

Every Verrat reinforcement will drop a Concoction upon defeat.

The only initial enemy on this map is the Umbral Beast itself, but every start of each player phase, Verrat manifestations will appear to assist the Umbral Beast. At the start of the enemy turn, The Umbral Beast will absorb 18 health of any Verrat alive. The Verrats themselves do not have any movement and are not that strong, but can be a bit of a nuisance. Your best bet is to trigger an armor break as fast as possible.

On your first turn you get put all your units on the edge of the Umbral Beast's attack range and Hapi just within it, so she will counterattack and destroy a single armor tile. on the next turn, use all of your AOE Gambits and long range units to destroy the rest of the armor and inflict the armor break. After you have achieved an armor break and start attacking the Umbral Beast; the remainder of your units should take out the enemy Verrats to make sure the Umbral Beast does not regenerate. In general try to always completely deplete a health bar, instead of leaving it with a small amount of health to trigger the next full healthbar, negating the healing it would have received on its next turn. If needed, remember that you can use Gambits to taunt the boss into attacking a designated tank.

On turn 4, the Umbral Beast should use his first Staggering Blow: Umbral Surge. This will deal 25% of their max HP to all your units, while also moving them around the map. This will however also stagger the Umbral Beast, preventing it from counterattacking and also losing some Critical Resistance for that turn. The Beast will recover the next turn, but will do nothing if you pull all your units out of range. This means you have an unlimited amount of time to heal before reengaging the boss, aside from the Verrats that must continue to be dealt with.