Sean Chiplock
[view]
“You don't look half as scared as you ought. Don't you value your lives? It's time you had the fear of death put back into you!”
—Wolff, before battle

Wolff (ウォルフ Worufu, Wolf in the Japanese version) is an enemy character on Celica's route in Fire Emblem Gaiden and its remake. As a Sniper, he has a large range and is hard to reach in his Desert Stronghold. These factors making him one of the tougher bosses in the game.

In Gaiden, Wolff has no dialogue, though he is implied to be one of the Grieth Pirates.

Owing to the minor role he plays, Wolff is not well developed. However, several aspects of his character can still be gleaned. For one, Wolff can be considered a prideful individual, taunting his enemies based on their appearance before analyzing the details. A fact is shown when he calls out to Celica's group that they should be afraid for taking a step into a deadly territory, and takes it upon himself to deliver the fear of death back into them. One can see that he still refuses to admit his defeat when he mumbles about during his final moments.

*Due to equipped Steel Bow 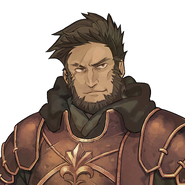 Wolff's portrait in Shadows of Valentia. 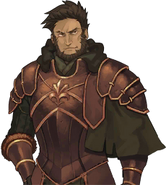