Odd Shaped
Beastbane
[view]
The Wolfskin (ガルー Garū, lit. Garou) is a combat shapeshifting class introduced in Fire Emblem Fates. Able to switch between a humanoid and werewolf-like creature forms with the aid of concentrated power stored within Beaststones, Wolfskin are the Nohrian counterpart to Kitsune.

The Wolfskin are a tribe native to Nohr. Their village on Impassible Peak is rarely visited by outsiders, due to the difficulty of traversing the mountain as opposed to other, more direct routes through Nohr, as well as the Wolfskin's reputation for hostility. Their coordination as a pack alongside their immense strength makes them an incredibly dangerous to approach, even for the most skilled warriors. They also have exceptionally strong sense of smell, allowing them to easily discern people even from a distance or out of sight. This also makes them incredibly difficult to ambush. The Wolfskin are, however, occasionally targeted by poachers for their rare fur, and encounters with these poachers have caused the Wolfskin to view other outsiders with suspicion. In Chapter 16 of Birthright, it's revealed that Wolfskin are scavengers and some people can get sick fighting them due to diseases found in the meat.

The Wolfskin tribe is much like a real wolf pack, living as a unified family of many individuals, though not necessarily tied by blood. Their current leader is Keaton who is considered exceptionally strong and is particularly bloodthirsty, though it is shown in Birthright that he can allow outsiders to go through his lands if he trusts them.

The Hoshidan army passes through Mount Garou in favor of more direct, yet dangerous and risky route, in Chapter 15. Keaton and two Wolfskin approach Corrin, and after a short confrontation, allows them to pass. Unfortunately for the Hoshidans, Iago detonates a magical mine from afar which kills a Wolfskin, causing the Hoshidan Army to battle the Wolfskin and end up massacring them in self-defense.

In Chapter 14, the leader of the Wolfskin, Keaton, has wandered off collecting bugs. Due to his poor sense of direction, he quickly gets lost and ends up in Cyrkensia, where Corrin and their Nohrian allies are battling Hoshidan assassins led by Kumagera. Keaton decides to approach Corrin to ask for directions and ends up joining their army.

In Chapter 13, the story is almost identical to that of Conquest, only that by the time Keaton arrives to Nestra it is already been mostly destroyed by invisible soldiers and that the remains of the city have been turned into a battlefield between Xander and Ryoma. He then helps the Kitsune leader Kaden in trying to keep the buildings stable, but both get injured by the invisible soldiers doing so. As luck would have it, they are found by Corrin and explain the scenario before both men decide to join the army.

After the war, Keaton (and his spouse, if he is married) return to Impassible Peak, still keeping his role as leader of the Wolfskin.

Due to being a spin-off of the traditional werewolf, Wolfskin come dressed in Eastern-European townspeople's clothing.

The male/enemy variant has them wearing a black vest with a white shirt underneath that has a collar meant to cover the neck, both of which are unbuttoned to show some of the upper chest, black pants fitted especially for Wolfskin since they are born with a small wolf's tail and ears as well as brown leather gloves, strapped boots and what appears to be a small harness with small pockets attached to the sides to hold small valuables such as coins. The enemy version has an additional scarf-like red hood.

The female variants is similar to the male one in terms of color, wearing custom black pants and having brown leather gloves. What's different is that they wear a white frilled shirt, they use a belt instead of a small harness, the boots use laces instead of straps and they wear a leather, under-bust corset with two belt-like straps that extend around the waist in an anti-clockwise direction. With Velouria's unique model, she wears a hooded cloak that is red on the outside and white on the inside with detailed white stitching along the edges.

In their wolfskin transformation, both genders are completely the same in appearance. Transformed wolfskins stand on two legs and are covered in white fur. Their most notable feature and method of attack are their thick, powerful arms with clawed hands. Their stomach and chest area show exposed, black skin and they have a mantle of fur covering their shoulders. Their face is wolf-like with prick, upright ears and an open mouth of fangs.

In French, the term "Garou" means "lycan", which can be short for "lycanthrope", a human who turns into a wolf-like monster that is more popularly known as a werewolf.

Concept art of a transformed Wolfskin 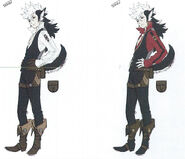 Concept art of Keaton as a Wolfskin and a Wolfssegner 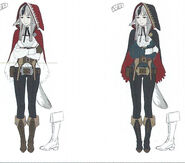 Concept art of Velouria as a Wolfskin and a Wolfssegner 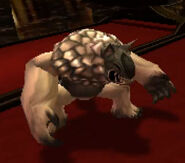 Battle model of Keaton as a transformed Wolfskin.