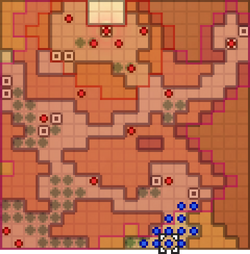 Chapter script
[view]
“Corrin's army manages to break through the border, but control of the main route to the castle remains in Nohrian hands. Corrin seeks another path.”
—Opening Narration

Wolfskin Peak (人狼の峰 Jinrō no mine lit. Summit of Werewolves in the Japanese Version) is Chapter 15 of Fire Emblem Fates in the Birthright Version. This chapter takes place in Mount Garou.

Warning: This chapter marks the only time in the Birthright route that a playable character can die as a result of the story, instead of a battle. Prior to starting this chapter, Kaze must have at least an A-Support with Corrin or else he will die at the end of the Chapter and cannot be used for any future chapters in Birthright.

Note: If Kaze has achieved an S-Support at any point prior to this chapter, Midori's chapter will not unlock until the end of this chapter and only if he survives.

The opposing force consists entirely of Wolfskin and Wolfssegner, all of whom will fare poorly against Kaden, any unit armed with a Beast Killer, and any unit who can attack from a range. Kaden, Takumi, and either Subaki or Hinoka are extremely useful for this chapter, particularly the latter, as pegasus knights can fly about the map and deliver effective damage to stray opponents.

Wolfskin and Wolfssegner excel in mountain combat, enjoying a reduced movement penalty when traversing mountains. Wolfssegner especially have no movement penalty when moving through forest. This is problematic,as much of the map is covered in mountains and forest, and the wolves will often enjoy the benefits of increased evasion and the chance to get the jump on your units while you can barely move. The enemy force is extremely scattered, however, and can be picked apart without too much trouble, especially using Takumi and a Beast Killer-armed Hinoka or Subaki. Very few of the Wolfskin are aggressive, so you could very easily camp out right where you start and wait out the reinforcements and few aggressive units before launching your attack. You can use Dragon's Veins to decrease the stats of all enemy units on the map by 4, though they will recover at a rate of 1 per turn, and you only have access to three total, with one of them likely unreachable by anyone but Hinoka or Kinshi Knight Takumi. Use them only when you need them most.

Enemy reinforcements will appear from the bases near the starting position, the bases at the left end of the map, and the bottom left corner of the map. The final wave of reinforcements can be a bit overwhelming, so you should have your units positioned to defend against it when the time comes.

The Wolfseggner are all armed with one skill per unit, mostly consisting of the likes of Pavise, Aegis, Strong Riposte, and such. Some of them are also wielding Beastrunes instead of Beaststones, making them harder to take down.

The boss, Keaton, is in possession of a Beaststone+, making him especially deadly, but more so when he has Odd Shaped activated, increasing his damage on Odd numbered turns. Beastbane makes him especially deadly, making Kaden and Subaki/Hinoka very susceptible to death if they engage him in combat. It is best if you lure him away from any forests and mountains using a non-beast unit on an even numbered turn before engaging him in indirect combat.

End of turn 4: 2 Wolfskins in the south-eastern forts

End of turn 5: 6 Wolfskins in total; 2 from the south-west corner, 2 in the central forts, and 2 in the forts at the western border of the map

End of turn 6: 4 Wolfskins in total; 2 in the central forts and 2 in the forts at the western border of the map

End of turn 9: 1 Wolfskin and 1 Wolfssegner in the forts closest to the boss and 2 Wolfsskins in the north-estern forts

End of turn 10: 1 Wolfskin and 1 Wolfssegner in the forts closest to the boss and 2 Wolfsskins in the north-estern forts