Khoi Dao
[view]
“I will perfect my skills with the bow and ensure Lord Roy can count on me!”
—Wolt in a support conversation with Marcus

Wolt is a playable character in Fire Emblem: The Binding Blade. He is the son of Rebecca, and a sworn retainer of House Pherae. He is one of Roy's closest friends, and is quite dedicated to him.

The identity of his father is left ambiguous, so it could be the archer Wil, the Pheraean cavalier Lowen, the Caelin cavalier Sain, or an unknown character.

Apparently, he is not very confident in his role as one of Roy's allies, though his superior, Marcus, assures him that being Roy's friend is an invaluable role for providing moral support.

He makes a very brief cameo in Chapter 6 and 17 of the Hasha no Tsurugi manga.

Wolt is Roy's childhood friend, having grown up together from childhood as well as being of the same age, he shares a close friendship with him. As an archer in service to Pherae, Wolt is characterized by his diligence and earnestness in wanting to protect Roy, but as a consequence, unintentionally creates some distance with Roy in order to fulfill his duties. The conflict between them can be cleared up in their supports, in which Wolt declares his trust and allegiance in Roy and assuages his feelings. Wolt treats Marcus with great respect for his station and age, and has friendly relations with Alen and Lance, both of whom he emulates in some way in order to grow stronger for Roy's sake. He can befriend the nomad Sue, as well as discover, together with her, the inherent differences of being either infantry or cavalry while armed with a bow.

In his role in the story, Wolt assists Roy in retaking Castle Pherae from the bandits that seized it at the beginning of the game, and then continues to help him throughout the duration of his campaign in the Lycia Alliance Army, eventually participating in the war against Bern, and ultimately following Roy back to Pherae to assist him in its reconstruction.

In most of his support conversations, Wolt is shown to have an overly dutiful and deferential personality. While he is extremely loyal to Roy and willing to protect him at all costs, he inadvertently distances himself from Roy as a result of following his duties too rigorously. Another facet of his personality is his determined attitude, since he is always striving to improve himself further by training and learning from others to gain more experience.

Description: An archer serving Pherae. Was raised like a brother to Roy.

Wolt has great availability, but little else going for him. His low bases and lack of strong enemy phase make it difficult to train him, and he's quickly outclassed by bow users that join later on. His best use is providing early game chip damage during the period of time he has free deployment. He follows under the Gordin archetype being an archer with lower base stats than the main lord, but has potential to become a good sniper with a lot of effort put into grinding. Overall, Wolt is often regarded as ranking among the worst units in the game. That said, his early game contributions with his chip damage are good enough to not disregard him entirely at the beginning.

Sunbeam Archer
Knight of Pherae. His devotion to his foster sibling and lord, Roy, is apparent—even at the beach. Appears in Fire Emblem: The Binding Blade.

Final Chapter: Beyond the Darkness Quote

“No matter what happens, I will protect Lord Roy...”
—Wolt’s final chapter quote

“Why so soon...? I'm sorry, Lord Roy... I can't help you any further...”
—Wolt’s death quote
“L-Lord Roy...This is only a training session, so I'm fine, but if this were a real battle, I would be dead. When defeated, allies are gone forever.”
—Wolt, in the tutorial.

Wolt - Dutiful Archer (猛ける騎士 Takeshikeru kishi)
"Wolt returned to Lycia with Roy to assist him in rebuilding their homeland. Although many hardships stood before them, Wolt unwaveringly supported Roy and led Lycia to prosperity."

Wolt is illustrated in the trading card game Fire Emblem Cipher with the following cards: 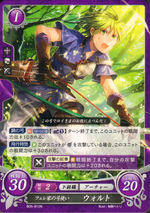 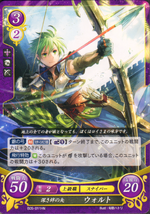 Wolt's English name is a misromanization of the name Walt, the short form of Walter. It may also be a portmanteau of Walt and Bolt.

Wolt's Japanese name "Walt", is the shorted form of "Walter", a Germanic boy's name, that means "Ruler of the Army"