Wolt's Bow (ウォルトの薬弓 Uoruto no kusuri yumi, lit. Wolt's Medicine Bow in the Japanese version) is a Bow from Fire Emblem Awakening. Eponymously named after the character of the same name from Fire Emblem: The Binding Blade, this bow is one that can restore HP to its wielder when used as an item. 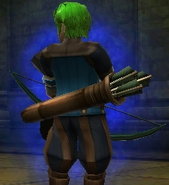