--
[view]
“But wyverns can be proud. They won't warm up to anyone they think unworthy. Took me three years before this one would let me ride on his back. Oh, he hated me at first. Always snarling and snatching at me... I don’t know how many times he threw me when I tried to ride him. ”
—Cormag talking about his wyvern

The Wyvern (飛竜 Hiryū, Flying Dragon in the Japanese version) is both a race and a class of Dragons that appears across the Fire Emblem Series. An uncommon type of dragon, Wyverns, much like Fire Dragons, expel Fire Breath to damage their foes. Wyverns are also a common flying mount that is employed by classes like the Wyvern Rider and Wyvern Lord.

In Shadow Dragon and the Blade of Light and Mystery of the Emblem, Wyverns appear as the mounts ridden by the Dracoknights of Macedon.

After Mystery of the Emblem, true Wyverns are largely replaced by a similar more dragon-like wyvern mount that possess four legs and wings. True Wyverns do appear as the mounts ridden by the Dragon Rider class that appears in Genealogy of the Holy War and Thracia 776, alongside the Wyvern Knight class exclusive to The Sacred Stones. Wyverns later reappear as the only dragon mount in Awakening and Fates.

In the remakes of the Archanea Series, all Wyvern Riders straddle the four-legged variation of the Wyvern mount, making the difference between feral and tame wyverns much more apparent. Feral Wyverns are also distinguishable by the purple colour scheme that they adopt, as opposed to the mounts' green-coloured scales.

In Mystery of the Emblem, feral Wyverns make their appearance for the first time in the series, where they attack their foes with Fire Breath. Although the Wyvern class is not closely intertwined with the Manakete class, Manaketes can still transform into Wyverns with the use of Wyvernstones, regardless of whether or not they are members of the Wyvern Tribe.

In the remake of Mystery of the Emblem, only feral Wyverns employ a separate Fire Breath weapon as their means to attack, while Manaketes directly use Wyvernstones as weapons instead. As before, any Manakete can transform into a Wyvern with the use of a Wyvernstone, regardless of whether or not they are members of the Wyvern Tribe.

Wyverns can live in the harshest environments, but most are found in high mountain regions and sometimes near volcanoes. They are particularly protective of their home and have been known to go on rampages that can raze villages if disturbed. They are extremely robust and are difficult to kill, let alone wound. They primarily use their spiked tails, sharp teeth, and occasionally a fire breath to attack enemies

They have been known throughout the Fire Emblem franchise to be the most difficult mount to tame, as the wyverns are stubborn, proud, and often vicious. Only people who display strong will and power are able to command a wyvern, let alone ride one. They are astute creatures who can pick up the slightest hesitation in their prospective riders and will flat out reject anyone without full confidence to command them. Once properly tamed, the Wyvern becomes extremely devoted and protective of its master. Some have even been known to protect their master's children or become their mounts, showing a strong bond for their master. While Pegasi are known for their gender preference, sometimes only having females as their riders, wyverns will accept any person, regardless of their gender, that earns their respect.

In Mystery of the Emblem, Wyverns are revealed to have been once a proud tribe of dragons, taking up residence in Dolhr. Like the other Dragon tribes, the Wyverns were heavily impacted by a plague of degeneration that caused them to lose their sanity and turn feral. The impact of the plague was particularly pronounced amongst the members of the Wyvern Tribe, as in-game events depict the tribe as one that is devoid of any Manakete survivors, perpetually composed entirely of hostile, feral dragons.

Both classes that use the Wyvern mount and the Wyvern class itself, like most other Flying Units, are vulnerable to Bows and Wind Magic. This is altered in Radiant Dawn, where they are shed their vulnerability to Bows and are weak to Thunder Magic. Both types of classes also commonly have a weakness to dragon-slaying weapons such as the Wyrmslayer, the Book of Naga from Awakening and the Legendary Weapons of Elibe. In Awakening, Manaketes also inflict effective damage against Wyverns if they are equipped with the Wyrmsbane skill.

True to their name, Wyverns are armless dragons with wings extending from where their arms would be. When making contact with land, Wyverns are observed to rest on their hind legs. Wyverns in Three Houses appear to have antler-like horns.

The later and more common iterations of dragon mounts, also referred to as Wyverns in the English versions until Radiant Dawn, are introduced to the series in Genealogy of the Holy War as the mounts for the Dracoknight class and its promoted form. These Wyverns possess wings that protrude from their backs, alongside a pair of arms and legs. Like Wyverns until The Sacred Stones and New Mystery of the Emblem, these mounts are referred to as dragons in the Japanese versions, but are renamed to "wyverns" in the English translation of The Blazing Blade to avoid confusion with the dragons who fought in The Scouring.

Concept art of the Wyvern mounts from Fire Emblem: The Binding Blade.

Concept artwork of the Wyvern mounts from Fire Emblem: Path of Radiance.

Concept artwork of the Wyvern mount from Awakening.

Concept artwork of the Wyvern Lord's Wyvern mount from Awakening.

A Level 10 Wyvern, as it appears in the fifth series of the TCG.

A Level 10 Wyvern Manakete, as he appears in the fifth series of the TCG.

Generic class portrait of a Wyvern from New Mystery of the Emblem. 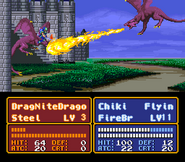 Screenshot of Tiki attacking a Dracoknight as a Wyvern in Mystery of the Emblem. 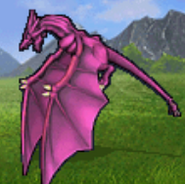 Battle model of a Wyvern from New Mystery of the Emblem.