View source
“I hear this place is home to Macedon's great wyverns. But since the area is overrun with barbarians, even the Macedonian soldiers dare not set foot in here.”
—Jagen

The Wyvern's Dale (alternately translated as the Dragon's Dale) is a location in Fire Emblem: Mystery of the Emblem and its remake. It is the setting for Chapter 21: The Wyvern's Dale.

The Wyvern's Dale is located precisely on the border of Macedon and Dolhr, and is an uncivilized land populated by wyverns and barbarians. It surrounds the Dragon's Table, forcing Marth's party to pass through here in order to enter the Table, defeat Gharnef and Medeus, and save the four missing clerics. 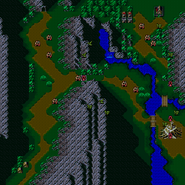