Canto(FE10 only)
Quick Burn (FE13 only)
Rally Defense (FE14 only)
Swordbreaker (FE13-14)
[view]
The Wyvern Lord (ドラゴンマスター Doragon Masutā, lit. Dragon Master in the Japanese versions) is a Wyvern-mounted combat physical class that recurrently appears across the Fire Emblem Series, beginning from Fire Emblem: Genealogy of the Holy War. One of the promoted forms of the Wyvern Rider class, Wyvern Lords commonly wield Lances as their primary weapon of choice, and wield either Swords or Axes as their secondary weapons of choice. In more recent installments, the primary weapon armed by Wyvern Lords has been changed to Axes, while Lances have been switched to their secondary weapon.

In its original inception in Genealogy of the Holy War, the Dragonmaster class is introduced as the promoted form of the Dragon Knight class, following the clean separation of the latter class from the Pegasus Knight class. This iteration of the class wields both Swords and Lances as its weapons of choice.

Beginning from The Blazing Blade, the Dragonmaster class is officially localized as the Wyvern Lord class, and will continue to be referred to as such for most of the following titles in the series.

Beginning from Path of Radiance, Wyvern Lords begin arming Lances and Axes as their weapons of choice, shedding the ability to wield Swords.

In Radiant Dawn, the Wyvern Lord class is again referred to as the Dragonmaster ( Doragon masutā). This version of the class wields Lances and Axes as its weapons of choice, and is further able to promote into the Dragonlord class when the necessary requirements are fulfilled.

In Awakening, the Wyvern Lord returns and continues to have high Strength, Defense, and HP. It does have average Speed and Skill while continuing to have low Resistance. They continue to use Axes and Lances like in Path of Radiance and Radiant Dawn as opposed to using Swords and Lances in The Blazing Blade andThe Sacred Stones.

In Fates, the Wyvern Lord class is treated as a Nohrian class.

The class returns in the spin-off Fire Emblem Warriors. In that game, the class only uses Axes, and acts as the promoted class for Minerva. Gameplay-wise, the class acts as a clone of Camilla's Malig Master.

In Vestaria Saga I, the Wyvern Lord is known as the Dragonmaster. The class wields Swords, Lances and Throwing Spears. This class has the highest Movement in the game.

In The Binding Blade, The Blazing Blade, The Sacred Stones and Path of Radiance, Wyvern Lords are flying units that, when compared to Falcon Knights, boast higher HP, Strength and Defense at the cost of Speed and Resistance. Their Skill tends to be below average in most of the games, but is actually above average in Radiant Dawn and Fates. Like other flying classes, Wyvern Lords are vulnerable to Bows and Wind magic (this is changed to Thunder Magic in Radiant Dawn). Their resistance in particular is consistently low and in many appearances is the lowest of the regular promoted classes.

In Awakening, Wyvern Lords learn two skills, Quick Burn and Swordbreaker. Quick Burn allows its user to hit and avoid better at the beginning of the battle, after which the effects wear off gradually. The beneficial effects of the skill should thus be taken advantage of quickly before withdrawing the unit in question from direct harm. Swordbreaker, on the other hands is ideal when battling against sword users, in particularSwordmasters and Assassins because of their high Skill.

In Fates, Wyvern Lords retain the Swordbreaker skill, but Quick Burn is replaced with Rally Defense. They are still effective against Swordmasters. The only change when it comes to the use of Swordbreaker is that Wyvern Lords can only attain B-rank proficiency in Lances. With the absence of Wind Magic, other than the Excalibur tome that only Sorcerers and Witches can use due to being the only classes with access to S-rank tomes, Wyvern Lords are most vulnerable to Bow users and units with weapons that are effective against dragons, like the Wyrmslayer and the brand new Dragon Spirit. They are also quite effective against Master Ninjas when they are wielding axes due to the generally low defense in Master Ninjas and the Wyvern Lord's generally high Strength and Defense stats and axes having advantage over Shuriken, with the exception of the Dual Shuriken.

In Three Houses, the Wyvern Lord is often considered the best non-exclusive class for physical units (plus Annette), due to a combination of its Strength and Defense, as well as its increased Speed compared to previous installments. The lack of weapon restrictions allows them to equip most weapons to deal with any given situation, and their high movement and flying status is a major asset, due to the maps often being large and having unusual terrain. 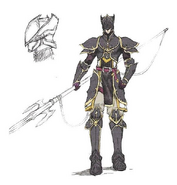 Concept artwork of the Wyvern Lord class from Path of Radiance. 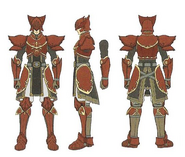 Concept artwork of a Dragonmaster from Radiant Dawn.

The first set of concept artwork featuring the female variant of the Wyvern Lord class from Awakening.

The second set of concept artwork featuring the female variant of the Wyvern Lord class from Awakening. 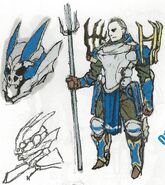 The first set of concept artwork featuring the male variant of the Wyvern Lord class from Awakening. 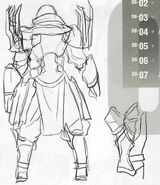 The second set of concept artwork featuring the male variant of the Wyvern Lord class from Awakening.

Concept artwork of the Wyvern Lord mount from Awakening.

Concept of a female Wyvern Knight from Fates

Concept artwork of the Wyvern Lord class from Fates.

Seteth as a Wyvern Lord in Three Houses.

Generic class portrait of a Wyvern Lord from the GBA titles. 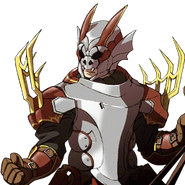 Generic class portrait of a Wyvern Lord from Awakening.

Battle model of Altena, a Dragon Master from Genealogy of the Holy War.

Animation of a Wyvern Lord attacking with a Lance from the GBA titles.

Jill as a Wyvern Lord in Path of Radiance.

Gromell ad a Wyvern Lord in Path of Radiance

Jill as a Dragonmaster in Radiant Dawn.

Haar as a Dragonmaster in Radiant Dawn.

Istvan as a Dragonmaster in Radiant Dawn 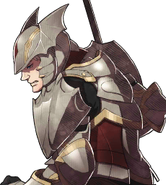 Generic class portrait of a Wyvern Lord from Fates.