In TearRing Saga: Utna Heroes Saga, Dragonmaster appears as the personal class of a major antagonist, the class uses both Lances and Swords. Dragonmaster has some of the highest stats in the game and could be considered the flying counterpart to Gold Knight but with higher defense.

The class reappears in TearRing Saga: Berwick Saga, where it uses Small and Medium Shields in addition to Swords and Lances. Just like before, it has very high stats and is used by a lategame antagonist. Wyvern Master has a stat cap of 60 Spear rank, allowing the user of its class to have a 10% critical for his attacks.

In Three Houses, the class appears as the advanced Lord promotion for Claude and is usable in the Golden Deer route, available for Claude upon reaching Part II. In this appearance, the Wyvern Master specializes in bows, a unique trait among Wyvern riding classes.

In Three Hopes, the class reappears as a personal class for Claude and is usable in the Golden Wildfire route. Akin to its original appearance, the Wyvern Master uses bows, as well as fireballs from the wyvern Claude rides. It is deemed part of the Archer path of the Fighter class tree, found right beside the Archer for Claude. 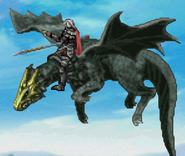