Ben Lepley
[view]
Xaizor (サイゾー Saizō) is an enemy boss character from Fire Emblem Gaiden and its remake, Fire Emblem Echoes: Shadows of Valentia. A Rigelian soldier, he hinders Alm's progress while in the Rigelian Forest. In the original Gaiden, Xaizor has no dialogue or even a portrait.

Xaizor appears as the second boss of Chapter 4: The Land of Sorrow during Alm's route, where he impedes the hero's progress with a small group of witches and myrmidons. He and his soldiers are ultimately defeated and Alm's group presses on further into Rigel.

Xaizor has no dialogue in his original appearance and still does not speak much in the remake due to his minor involvement with the game's plot. However, one can still notice little of his character with the few lines he speaks. For one, Xaizor can be an extremely loyal individual, willing to show obedience to his liege regardless of his own views on the situation. Much is shown when he mentions having no malice towards the Deliverance, but doesn't hesitate to strike due to his obedience to his master's wishes. Xaizor also seems to show respect as such to the point of even revealing his name and reasoning while on the battlefield.

“My name is Xaizor, and I'm afraid your path ends here. While I bear you no grudge, my master's orders are absolute.”
—Xaizor's pre-battle quote.
“I can serve you...no longer...Forgive me...Emperor...Rudolf...”
—Xaizor's defeat quote. 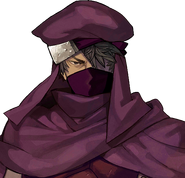 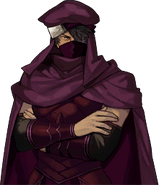