Chapter 14: A Mystery Revealed (Mystery of the Emblem)

Brandon McInnis
[view]
“Hey there, princey. Thanks for settin' me free! The name's Xane. I hail from a land few have heard of and even fewer have seen. I won't trouble you with the details. Me and my folk have the power to transform into other people. We can shape-shift, you see. When Dolhr caught on, they started threatenin' me. Told me to join their army or "face my doom." Hah! Well, I wasn't about to waste my considerable talent on those evil coots! You, on the other hand...You've got character. Say, why don't we team up? I do owe you for savin' my hide. And I think you'll find my considerable talents are...quite considerable.”
—Xane in Shadow Dragon.

Xane is a playable character in Fire Emblem: Shadow Dragon and the Blade of Light, Fire Emblem: Mystery of the Emblem, and their remakes. He is one of the few Divine Dragon survivors of the war against the Earth Dragons. After the war, he threw away his Dragonstone and lost the ability to transform into a dragon. However, he has a mysterious ability to shape-shift into anything except a dragon.

He works under Gotoh, despite their differing views of humanity, and in Mystery of the Emblem, he acts as a guide for Marth in his quest to reach Gotoh and follow his ancestor Anri. In the end, though, he once again vanishes.

Xane is a carefree and somewhat impish person who likes to play jokes (at one point he annoys Tiki by imitating her and repeating everything she says). He has some sympathy to the Fire, Mage, and Earth Dragon Tribes that ended up forming the Dolhr Empire, to the extent that he has stated some dislike towards humans due to seeing them mistreat the powerless manakete tribes in the past. At one point, even claiming to Marth that he was just an onlooker in the battle between Anri and Medeus.

Nevertheless, he does possess firm senses of honor and duty, as shown to his loyalty to Marth and Gotoh, and refused to join up with Dolhr when they tried to press him into joining. He has a strange fondness for Marth, constantly referring to him affectionately as "Princey". He can be supportive of others, as shown in some of his talks with Tiki.

New Mystery of the Emblem:

Xane is one of the better units in the very first Fire Emblem game. Unlike later versions, Xane copies all stats the character he transforms into in this game, including Max HP and current HP. This makes him much more versatile and usable from the moment you get him, and makes his non-transformed stats of much less consequence. You can give Xane a mix of Sword and Lance weapons as most classes in the game are able to use one or both, and he will instantly be as good as the best member of your team. You can even have him carry a Staff in case you need another healer, or turn him into a flying unit.

Xane does come with some downsides to him, as his transformation will eat up a turn, and his transformation wearing off at bad times can put him at risk. However, that may not be a huge issue if you transform near the beginning of a map, as it should last for enough turns for you to take on the bulk of enemy units on any given map. Xane will also be wasting Experience Points when he kills units since any EXP he gains while transformed is lost (though at the point in the game where you recruit him, your characters are very likely close to max level). Leveling Xane's non-transformation form is a pain as he is very weak, so it is probably best not to bother as leveling him will barely increase his survivability and he should be spending pretty much all of his turns transformed.

Xane's ability to copy your most potent units and switch between them as the situation calls for negates most of his downsides, If you can deal with his unique style, he will make a great addition to your team.

Chapter 16, enemy, talk to him with Marth.

Chapter 14: Automatically from the start.

The only stats that matter for Xane are defense, HP, speed, luck, and resistance due to the fact that he cannot attack while untransformed (with the exception of the Super Famicom version of Mystery of the Emblem, which allows him to use swords). When Xane transforms, he mimics the stats of the selected character, meaning that the only stats that matter for him are the stats that will help keep him alive or reduce the damage he takes while he is untransformed (in the Super Famicom version of Mystery of the Emblem, Xane does not copy the Max HP of a character, unlike other versions of the game). It should be noted that Xane should be healed after transforming, as his HP does not instantly regenerate after transforming. Also, he can use weapons which are restricted to certain characters, such as the Rapier, Hammerne Staff, Aum Staff, and Wing Spear, except for the Falchion. He also cannot copy Manaketes. Xane also does not gain EXP when transformed in the Super Famicom version, and you will have to level up while untransformed.

Autumn Trickster
A Divine Dragon who discarded his dragonstone and takes a human form to cause mischief. Appears in Fire Emblem: Mystery of the Emblem.

Halloween Xane is a colorless tome infantry unit who immediately is put to work as a powerful unit that requires little, if any, investments. Because of his weapon, he is quite possibly the only unit that never needs to be merged to be considered competitively viable. Halloween Xane is essentially two units depending on his orientation with his team. On his own, he is mostly subpar in terms of stats as he has low Atk and moderate Spd. His overall bulk is good, given that he has a 47 HP stat and 25 Def and 30 Res. Few can find any good sides to him on face value alone, but like his role in Shadow Dragon, Xane is incredibly deceptive in nature. For those seeking preferred Traits, HP is his only important stat as literally all of the others stats can be taken as a bane as his weapon ultimately renders these moot. .
Where Halloween Xane truly shines is in his unique weapon Jokers Wild beyond its +5 HP flat increase. He copies the highest value stats of all allied units within two spaces of him. Each stat of his allies are compared individually and he will copy the highest value, except for HP. Depending on his allies, Halloween can become a massive ball of stats as he calculates his copied based total by the highest of his allies's current visible changes like or even Summoner Support. He can become a nigh unstoppable, hard hitting, double attacking, supertank when the right team is on his side.
Reposition allows him to put allies on the opposite adjacent tile, perfect for him. Atk/Res Form grants him an additional Atk/Res buff based on the number allies within two spaces x2 and then +1, maximizing at 7. The buff is strong and synergizes with Jokers Wild, but it may be overkill rather than improving his overall performance. Infantry Hexblade allows adjacent physical units, except for beast units, to calculate their damage against the lower defensive stat of their foe and gains an Atk/Spd +2 buff.

Halloween Xane is best described as a character who is as weak as his strongest ally. Without his allies on his side, he loses more and more strength. Countering Halloween Xane has two main approaches; bait him away from his allies or target his allies first. Without his allies around him, he is subpar at best in terms of combat performance. Using Panic Ploy on his allies can result in minimized returns, making him far less impressive, but still needing caution. Theoretically, poking him out with Dazzling Staff/Wrathful Staff can also slowly whittle him down through splash damage, but it is highly reliant on manipulating his allies if trying to bait him away. An ideal Halloween Xane will have Close Counter or at least Close Foil, thus without either, close combat units can at least try to dispatch him before he has a chance to counterattack. Likewise using a Lunge or Drag Back ally can pull him away from his allies and depower him, especially if he is lacking the counter skills.

Halloween Xane's incredible potential from Jokers Wild makes any attempt at boosting his innate stats pointless. As such, giving him combat conditional bonuses is far more beneficial to him. Sol or Noontime gives him self-sustain and with his high bulk and damage, he is essentially un-killable as he can quickly charge the latter and heal any of the small damage he may have taken with the right bulky allies behind him. Close Counter or Close Foil synchronize perfectly with him, making him far harder to engage upon, sometimes even requiring the foe to sacrifice an ally just to bring him out of his weapon condition's range. Null Follow-Up will prevent units from stopping his ability to perform follow-up attacks which again makes him more problematic in stopping his offense. Vantage is a decent budget option that ensures that he can sneak a preemptive attack against certain enemies who run Galeforce builds or similar nature like Legendary Edelgard. Pulse Smoke will slow his enemies special cooldowns, making it harder for them to attempt to burst him down before he can recover.

Desert Mirage
A mysterious young man who can adopt the appearance of others. He's come to answer the call of Hatari festivities with aplomb. Appears in Fire Emblem: Mystery of the Emblem.

Shape-Shifter
After the war, Xane left without a word. It was not until later that Marth learned his true identity.

Divine Youth
Xane vanished once more after the war. All that remained afterwards was the odd anecdote of an eccentric shapeshifter.

Xane is illustrated in the trading card game Fire Emblem Cipher with the following card: 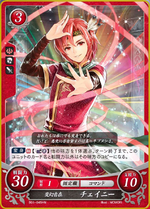 His name in Japanese, Chainey, is possibly derived from Lon Chaney Sr., a famous silent actor known as the "The Man of a Thousand Faces".

“A certain shape-shifting youth will have an important role, in the guise of a mysterious bard and sage. Since this game occurs in the same time period as the first game, Dark Dragon and Sword of Light, more characters may return if the need arises.”
—Shouzou Kaga answering a question about returning characters in an interview conducted by Famitsu