“I was a slave until Admiral Vals saved me. I worked from dawn till dusk without even decent meals... The master's children picked on me, spat on me, hit me... They struck me with a cattle prod, yelling, 'You're not human! You're just an animal!' 'Animals shouldn't speak!' I was so angry, but I couldn't stop crying. And for the first time, I hated my parents. To them, I really was a worthless animal. They gave birth to me, then threw me away...”
—Xeno, reminiscing about his past

Xeno (ゼノ Zeno) is a playable character from TearRing Saga: Utna Heroes Saga. He is a sixteen-year-old swordsman with a polite and kindhearted personality. He is stated to resemble Tia, which hints that they are related. Depending on events triggered during the story, he can become Yuni's love interest.

As a toddler, Xeno was found on the outskirts of Trente and then adopted by a farmer, who died when he was five. Afterwards, he was captured by slave traders and sold to a wealthy family of nobles. He was forced to work both day and night without much food while enduring the bullying of the family's children. One day, he lost his temper and smacked one of the children across the face. As punishment, the family's master pressed a hit iron against Xeno's back while telling him that he was not human. Due to his painful life, Xeno began to deeply hate his parents and cursed them for bringing him into the world.

At the age of thirteen, Xeno was rescued by Captain General Vals of Granada and thereafter joined the Sea Lion. He is introduced when Holmes finds Katri on one of Maerhen's ships. Unlike Holmes, Xeno treats Katri with great kindness, which causes her to introduce herself and show the Ring of Salia to him. After Katri flees from the crew due to Holmes's harsh behavior, he and Yuni begin searching for her. In the midst of a battle against hundreds of monsters, the two of them reunite with Katri. They are also reinforced by Runan and his army, who aid them in defeating the monsters. Later in the game, he can rescue Yuni from a slave trader if she accepts an offer of drugged milk.

In the ending, Xeno is ordered by Holmes to remain at Katri's side. However, the two of them eventually separate, as she decides to travel around the world alongside Holmes. If Yuni was captured by the slave trader earlier in the game, he remains at her side and learns about her tragic past.

Xeno will become a force to be reckoned upon reaching higher levels. His growths are decent across the board, with the exception of his slightly average HP. Trained to his full potential, Xeno will hit hard, fast, and be somewhat brittle. Regardless, he is a good unit in terms of stats and possesses some amazing skills, such as Rising Dragon and Anti-Evil. He is a satisfactory pick for the player's team.

Xeno's battle model as a Fighter. 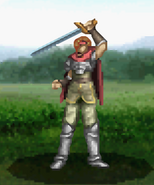