Chris Smith
[view]
“I want to do more than just survive... There's something else about being taguel. Something I feel in every hair of my being... It's something I can't quite put into words, but maybe when I can, it will help guide us.”
—Yarne in his support with his mother, Panne.

Yarne is a playable character in Fire Emblem Awakening. He is Panne's son from the future, and a member of the Taguel race. Yarne can potentially be the brother or father of Morgan.

As the son of Panne and her human husband, Yarne was born in the future as the first human-taguel hybrid (and if Henry is his father, it's specifically mentioned in his and Panne's shared ending that near all of Yarne's genes come from his mother). This made him a clear sign that the Taguel would survive. Unfortunately, he lost both parents at a young age. His father's death was particularly painful: he promised to Yarne that he'd return from battle, but died in the battle right after this conversation, breaking that promise.

With the death of his mother Panne, Yarne became the new "Last Taguel" in the world. Though Yarne has immense pride of his Taguel heritage, he also feels like he's burdened by his "Last Taguel" status. Unlike the other children, Yarne does not mention having Panne's wedding ring, but is assumed to have followed suit. Seeing the opportunity as a means of self-preservation, Yarne joins Lucina and the other children to travel back to the past to prevent the ruinous future. Upon arriving in the past, separated from his friends, Yarne searched for strong allies to protect him and eventually stumbles upon the Stonewall Knights, whom he stays with until the revelation with Lucina at Carrion Isle.

In Yarne's Paralogue, a turf war between the Riders of Dawn and the Stonewall Knights erupts. Chrom's army arrives to break up the turf war. When Panne recognizes the scent of another Taguel, she finds and approaches Yarne, who instantly recognizes his mother. When Panne asks him why he is with a bunch of random warriors, he tells her that, to help him survive, he tagged along with them due to their strong defenses. Disappointed in her son's cowardice - going so far to hide behind other "man-spawn", Panne tells Yarne that she will be teaching him taguel pride through the battle. If Chrom talks to Yarne, he tells Chrom not to sneak up on him, but Chrom says he was standing right in front of Yarne, and asks him whether he should have waved first, or if that would have been too threatening. Yarne compares Chrom to a jester, and says that people die from much lesser things and that death is no laughing matter. Chrom tells Yarne that he should just surrender if he's afraid of death and has no desire to spill unnecessary blood. Yarne is surprised to hear that surrender is an option and joins the army. After the battle, Panne speaks to her son, happy to know that the taguels have managed to live another generation, even if it now carries human blood. Yarne is merely happy to see her again and declares that he is proud of his taguel heritage, which pleases Panne. Yarne joins Chrom's army, happy to be back with his mother.

After the war, Yarne departs on a journey to find somewhere safe to live. Ironically, this leads him into many dangers along the way. Luckily he manages to stay alive through all this and lives a long life.

During his support conversations with his mother, Yarne and Panne begin to build a relationship as a mother and son by making new habits and traditions, since neither of them have any recollection of their parents or traditional acts.

In his support with his father, Yarne is worried that his father may cheat on Panne, fearing that if he does, his existence may vanish. Though his father promises not to cheat on her, Yarne is still unsure and suspects he will break that promise because he broke his promise to come home. His father promises him that he will never cheat on Panne and that he'll stay alive for the sake of him and the version of him to be born later on.

During his supports with a female Morgan and a Female Robin, Yarne shows his distaste about being treated like a cute little bunny and hates being cuddled and petted. He is also extremely ticklish.

Yarne is cowardly, timid, and excessively worried as a result and is often on edge to his surroundings. He is extremely sensitive to anything that poses a threat to his survival, even the most minuscule of actions or objects that are non-lethal except in the absurdly extreme of circumstances causes and overreaction.

Yarne is actually robust in constitution and is a skilled fighter, especially when pushed into a corner. Despite prioritizing his safety, he is more than willing to throw himself in the way of an enemy to protect a precious comrade. His primary motivation to become stronger is to namely increase his chances of survival. Upon arrival in the present, this has since evolved to also protect his mother so that she can live on this time.

Yarne carries an extreme weight on his shoulders as in the future, with the death of his mother, he has become the new "Last Taguel". Yarne fears for his life as a result and would rather avoid fighting at all costs as his death would lead to the extinction of the Taguel back in the future. When arriving in the present, he became paranoid that his father may cheat on Panne as if that were to occur, his present counterpart would cease to exist. With some assurance from his father, he is relieved that his father will remain faithful.

Like his mother, he has no knowledge of traditional Taguel customs, but the two vow to forge new ones for their descendants. He is the loudest person in the army.

Description: An enigmatic taguel who fears for his species (i.e., himself).

Timid Taguel
Panne's son. The last of the taguel. Continually terrified that his death will mark the end of his race. Appears in Fire Emblem Awakening.

Yarne - Timid Taguel
Yarne traveled the world in search of a safer haven, a journey that was ironically fraught with danger. Nevertheless, he said to have beaten his fears and lived to a ripe old age.

Yarne and Robin
Many wrote of Robin's legendary exploits, but accounts of her origins and character varied. Scholars, poets, and bards agreed on one thing alone—she loved her husband, Yarne, above all else.

Yarne and Lucina
Yarne tried desperately to find a safe haven after the battles were done, but even that journey was fraught with danger, especially since Lucina was quick to dash to the rescue of every stranger.

Yarne and Kjelle
Yarne tried desperately to find a safe haven after the battles were done, but even that journey was fraught with danger, especially as Kjelle insisted on facing every foe to better herself as a warrior.

Yarne and Cynthia
Yarne tried desperately to find a safe haven after the battles were done, but even that journey was fraught with danger, especially as Cynthia wouldn't stop challenging brigands in the name of justice.

Yarne and Severa
Yarne tried desperately to find a safe haven after the battles were done, but even that journey was fraught with danger, especially as Severa continued to take on dangerous jobs to make ends meet.

Yarne and Morgan
Yarne tried desperately to find a safe haven after the battles were done. While Morgan's memory never returned, she didn't really seem to miss it, and the two lived out their days happily.

Yarne and Noire
Yarne tried desperately to find a safe haven after the battles were done, but even that journey was fraught with danger...despite Noire's best attempt to steer them out of trouble.

Yarne and Nah
Yarne tried desperately to find a safe haven after the battles were done. While Nah endeavored to steer them clear of trouble, they soon realized the best place was Ylisse, where their journey began.

Yarne is illustrated in the trading card game Fire Emblem Cipher with the following cards: 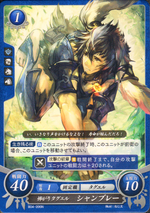 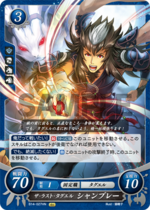 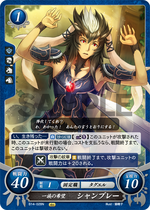 Yarne is named after yarn. His Japanese name, Chambray, is a type of fabric. Both are soft, much like his personality, and are not suited for battle-type situations.

Both of his English and Japanese names also compliment his mother's (Panne and Velvet, respectively), as they are commonly used materials.