Coldhearted
Myrmidon (As a Mirage Master)

Yoshimasa Hosoya
[view]
“Try showing me what this power of bonds you speak of is all about...”

Yashiro is a nineteen-year-old (eighteen in the original Japanese version) idol, like Kiria, and a Mirage Master. His Mirage partner is Navarre. His hit single is called "Black Rain", the theme song to his high rated show, "Labyrinth of Love". He appears to have some connection to the Mass Disappearance from five years ago in which both the performers and actors on stage vanished into thin air, including his father and Tsubasa Oribe's sister. His birthday is February 10.

For some reason, he stands before Itsuki and the others of Fortuna Entertainment. Although he initially acts as an antagonist, he eventually joins the party after they defeat him alongside Excellus.

Yashiro has perfectly mastered dancing, singing and acting and is considered a superstar. He has a personality as cold as ice and very rarely shows his emotions. As such, he can often come off as condescending and rude. Taking care to evaluate himself at all times, he is top class as a performer and Mirage Master. Yashiro is initially hostile to the party, and looks down on their abilities as Mirage Masters, he seems particularly disappointed in Kiria. He remains cold to others even after joining the group, but begins to warm up to them through his side missions.

After avenging his father, Yashiro announced his retirement on the final day of his tour. Afterwards, he decided to travel the world. Handwritten postcards arrive yearly at Fortuna, each containing pictures of Yashiro in new places, and each photo depicting him with a peaceful smile. Many hope that one day, he will return to the stage...

After appearing on Mamori's show, Yashiro learned the joy of food, and in a startling move entirely separate from his acting career, he opened a restaurant called Bistro Tsurugi. It gains fame for its refined cuisine, and though his acting career keeps him busy, Yashiro occasionally appears in its kitchen to cook some of the dishes himself.

After joining Fortuna Entertainment, Yashiro began accepting jobs he normally wouldn't, and even appeared on talk shows. He showed sides of himself that he'd never shown before, earning him his critics' respect as a true Renaissance man. Yashiro Tsurugi continues to evolve as an artist...

Yashiro Tsurugi - Best of the Best

Later in life, Yashiro took it upon himself to head a production of "The Pilgrimage of Heinrich," his father's final production. He handled the direction and music with usual aplomb, and the tour found success overseas, boosting his fame as a model of Japanese entertainment. Despite finding such great success at a young age, Yashiro never stops bettering himself and his skills.

Yashiro Tsurugi is illustrated in the trading card game Fire Emblem Cipher with the following cards: 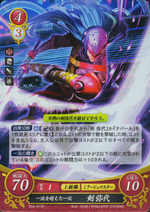 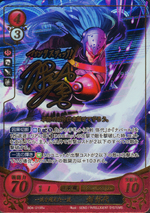 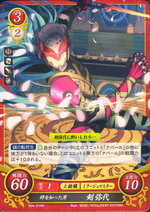 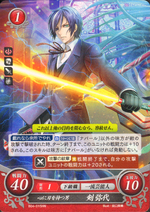