Ken Narita
[view]
Yatsufusa Hatanaka is character from Tokyo Mirage Sessions ♯FE. He is an ace producer said to be the cornerstone of any successful production.

Yatsufusa is first encountered while Itsuki and his friends explore Illusory 106 in their quest to save Ayaha. He claims to have gotten lost and found himself in the Idolasphere by accident, but the party directs him to safety before they continue on. Afterward, he encounters Itsuki and the others on repeated occasions, expressing curiosity about the Idolasphere, but lacking the apparent knowledge to understand the significance of it. Itsuki and his friends do their best to keep Yatsufusa in the dark.

During the entertainment festival Enter-Kingdom, the Cosmic Egg undergoes a dramatic transformation, and Itsuki's party arrives to investigate, only to find Yatsufusa. There, Yatsufusa drops his facade of ignorance, and reveals that he has been working with the Mirage Gharnef all this time. He is a madman that sees the destruction of the world as the ultimate entertainment, and thus wishes to see the Shadow Dragon Medeus summoned forth. To that end, he and Gharnef have conducted a ritual called the Opera of Shadows to awaken the Shadow Dragon, and he claims that the ritual has proceeded beyond the point that it could be stopped.

Later, when Itsuki's party enters the final trial chamber in the Illusory Area of Memories to acquire Marth's soul and perform the Opera of Light, Yatsufusa appears once more. He and Gharnef have captured Marth's soul to prevent the counter ritual from being conducted, but Yatsufusa, recognizing that Itsuki's party is to be reckoned with, offers all of his Performa to Gharnef so that the Pontifex can confront and destroy them. Regardless, Itsuki’s party manages to defeat Gharnef, perform the Opera of Light and destroy Medeus, finally putting an end to Yatsufusa’s crazy plans.

Yatsufusa's death isn't mentioned afterwards, nor his connection to Gharnef to the public. However it was possible that his death was labeled as a tragic accident as Maiko mentions that she has secret meetings with law enforcement to make sure that the mirage incidents stay secret.

Yatsufusa spends most of the game playing the fool and feigning ignorance toward Itsuki's actions. He comes off as the eccentric producer that he is regarded as, and in turn doesn't rouse the suspicions of Fortuna Entertainment. It isn't until after the Opera of Shadows has reached the point of no return that he lets down his mask and reveals his true nature.

Though he compares himself to Itsuki as being a "Mirage Master", his relationship to Gharnef isn't of the same sort. Gharnef treats the idea as something of an amusement and refers to Yatsufusa as "Master" in a sarcastic sense, but otherwise they are simply partners that desire the same outcome. 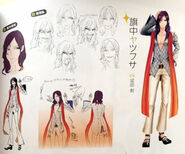