Nicole Balick
[view]
Yelena (ユアナ Yuana, in the Japanese version) is a character from Fire Emblem Warriors. She is the queen of Aytolis and the mother of prince Rowan and princess Lianna, and the wife of the King of Aytolis.

The current ruling queen, Yelena has suceeded the throne after her husband, the previous king of Aytolis, had passed away. As Aytolis is invaded, the twins meet up with Yelena to make their escape. However, while running through a cave, she is separated from the rest of the group by large boulders and so gives the Shield of Flames to Rowan and Lianna before urging them to go on without her, only to be completely trapped under the collapsed building.

Later on, Yelena is discovered to be alive, only to be revealed that Oskar and the possessed Darios are holding her hostage, preparing to sacrifice Yelena to revive Velezark’s full power, though the possessed Darios makes the proposal that if the twins surrender their weapons, he will spare her. When they do so, he turns to kill her anyways, but is stopped by Takumi, who predicted this outcome. The twins retrieve their weapons, and Rowan forces the possessed Darios back as Lianna rescues Yelena from the magic circle she was being held captive in.

After the defeat of Velezark and the restoration of peace to the continent, Yelena appears, along with the Aytolisan soldiers in the end of the game, to perform a crowning ceremony for Lianna and Rowan among the ruins of castle Aytolis.

Yelena is a kind and gentle woman, implied to be a just and wise Queen for the realm of Aytolis. She's troubled that her children both refuse to inherit the thrones, but she gently watches over them as they grow. She may not be able to fight but she does put her children and her kingdom's safety over hers. 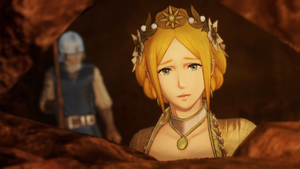 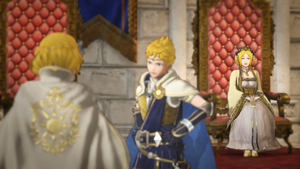 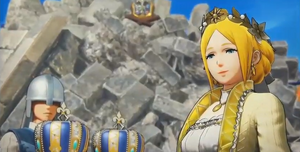 Yelena in the ending. 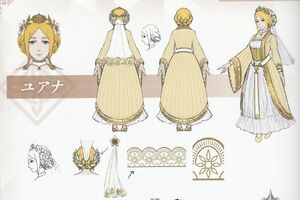