Paralogue 21: Ghost of a Blade

Kirk Thornton
[view]
“......Yen'fay is dead, and I no better. Let me offer up this blade to his sister in the hope it buys peace for us all.”
—Yen'fay in Paralogue 21

Yen'fay is an enemy character in Fire Emblem Awakening, though he is later made playable via SpotPass.

Yen'fay is the king of Chon'sin and the older brother of Say'ri. Yen'fay lived peacefully in Chon'sin until Walhart began his conquest there. His country was decimated and his parents were killed, leaving him only with his sister. After Chon'sin was conquered by Walhart, its army was integrated into the Valmese Imperial Army and Yen'fay was placed as one of Walhart's generals in exchange for Excellus allowing Say'ri to live. However Yen'fay could not bring himself to tell Say'ri about this and so he kept himself quiet. After Say'ri left the country, Yen'fay kept his part of the deal and continued his duty as a Valmese Imperial Army general, knowing that if he were to break ties, Say'ri would be killed.

It is unknown when Walhart tested Yen'fay in combat, but he notes that Yen'fay was the only person that managed to survive more than two attacks from him. In addition, he commands the Valmese Army's southern division.

As a general for Walhart, Yen'fay continued his services to protect Say'ri, although he never told her why he was fighting for Valm. During the assault on Fort Steiger, Robin placed two divisions north and south of the fort to delay the two armies. When the fort is captured, both Yen'fay and Walhart destroyed their respective groups and continue marching towards Fort Steiger.

As the Shepherds and the remaining rebels contemplate their options due to both forces marching towards them along with the betrayal of the dynasts during the assault. Chrom and Robin decide to face Yen'fay and his army at the Demon's Ingle, knowing that it would limit his army's movement and keep the dynasts out while they were fighting him.

During the battle, Chrom or Say'ri can face Yen'fay in combat. If Chrom battles Yen'fay, he will ask him why an honored swordsman is fighting for someone like Walhart, but he refuses to tell him why and Chrom asks if their is honor left, he can join him, but Yen'fay stands by his decision and forces him to fight. If Say'ri battles Yen'fay, she state that she will never forgive him, nor will she let him live, but Yen'fay spitefully states he doesn't need her forgiveness. She will ask him why he is helping the people responsible for the decimation of their country, and the death of their parents and did nothing to prevent it, but he remains silent, angering Say'ri. If Yen'fay is defeated in battle by Say'ri, she will ask him why he didn't bring out his best swordsmanship, but Yen'fay tells her that she is with people that are strong enough to protect her. If Yen'fay is defeated by Chrom, he will be shocked by this and Chrom again asks why Yen'fay fought for Walhart, but Yen'fay still refuses to tell him, keeping it to his graves. Yen'fay succumbs to his wound, but still did not tell Say'ri why he fought for the Valmese. Excellus appears and laughs at the fallen warrior as he explains to Say'ri why Yen'fay fought for Walhart.

Yen'fay's death would spread word throughout Valm after the battle. After Walhart is defeated outside the capital, the dynasts begin to help the rebels as they had feared Yen'fay, not Excellus.

In an alternate future, his plan failed, and Say'ri died through unknown means. Though he did not desire to do so, Yen'fay was sent through the Outrealm Gate and landed in the present timeline. In Paralogue 21, Chrom and the Shepherds heard rumors that Yen'fay was seen near the Warriors Tomb, causing them to investigate further. Fortunately, they find Yen'fay, and he is surprised to see that Say'ri is alive and well.

After they defeat the Risen infesting the tomb, Yen'fay learns from Say'ri that in this timeline, he had died instead. Yen'fay feels guilt and that he should have died instead of her due to his actions. He also blames himself for being a coward, since the Yen'fay of this timeline gallantly sacrificed himself for her. Say'ri also bears the same guilt as him due to not knowing about her brother's plan. Determined not to lose Say'ri again, he joins Chrom's army.

If Yen'fay is not spoken to by Say'ri, he is not seen after the battle and his fate is left ambiguous. Say'ri quickly moves on and states that she will save the land that Yen'fay loved so much.

After the war, Yen'fay vanished without a trace. Some speculate that he returned through the Outrealm Gate though there were no witnesses to his departure.

During his conversation with male Robin, he reveals that after his sister's death he defended her grave from the Risen and occasionally worked as a mercenary for food and to prevent others from feeling the same grief he did. In their final support, Robin convinces him to realize that his Say'ri would not want him to wallow in sadness but to move on and live a happy life, much like the present Say'ri feels for her brother. Yen'fay decides to finally integrate himself with the army and thanks Robin, considering him to be a friend.

During his conversation with female Robin, it is revealed he likes to meditate to envision his battles and put his mind at ease. He also talks of how the Yen'fay of this world is dead, and how he cannot return to his homeland, as much as he misses it. Additionally, he talks of how he is nothing but a blade to cut through enemies in this world and only his warrior's pride remains. In the A support he talks of discovering a new path for himself, which he continues into the S support saying he wants Robin at his side as he wanders the land.

Yen'fay has an old fashioned and serious personality and enjoys meditation. He has deep loyalty to his country as he was willing to join forces with the Valm empire to stop further bloodshed of innocent lives. However, much of his loyalty was actually due to his love and care for his younger sister, Say'ri. Because of a deal struck with Excellus, Yen'fay begrudgingly obeyed the man who murdered his parents just to keep her safe. Yen'fay stubbornly refused to let Say'ri in on his plan to further ensure her safety, even refusing forgiveness from her when fought in battle. He took this plan to the grave, but was happy to see that his sister was amongst strong and kind people who would protect her and make her happy in his place.

The Yen'fay from the alternate timeline suffers from survivor guilt. He constantly degrades himself for allowing his dear sister to die and stood by and defended her grave as a form of atonement before being thrown into the present timeline. Although he is happy to see that his sister is alive in the current timeline, he cannot bring himself to associate himself with her due to his sorrow. Nevertheless, this Yen'fay still cares deeply for his sister, however much of his motivation is to atone for his weakness and make sure that Say'ri lives a happier life this time.

He can stand the heat better than anyone in the army.

Yen'fay joins in with decent endgame stats and will be a third Swordmaster unit in your army. Yen'fay starts off with his skill and speed already nearly capped as well as having all of the skills from Myrmidon to Swordmaster at his disposal. With these skills and his starting stats, Yen'fay has a high probability of activating Astra and with a Killing Edge on hand, meaning he can possibly reach an incredible 7.5x normal damage together, more than enough to finish off any enemy, even bosses. Yen'fay can reclass to another promoted class immediately if needed and will need to if you want Yen'fay's stats to increase. His other Promoted option is the Assassin class. From here, Yen'fay gains a ranged weapon, Bows, Lethality to instantly kill off particularly hardy enemies, and Pass to help swarm enemies. Yen'fay's overall stats makes him decently strong, incredibly skillful with an outstanding speed cap of 50 as a Swordmaster, and has the standard high speed his class is known for.

Yen'fay's reclassing options are the Archer and Wyvern Rider classes. As an Archer, Yen'fay's high skill puts him right at home, making him a good Sniper replacement for Virion if the situation calls for it. He has the advantage of having Astra, an attacking skill, which Virion will not have or any other attack skill for that matter. However if Yen'fay will not be Virion's replacement, he still can learn quite a bit of skills that can aid him in his Swordmaster base. Hit Rate +20 boosts his hit rate to nail elusive enemies, though given his high skill, this should not be a problem on most difficulties. Bowbreaker is also great to aid his chances of being hit by Archers, whose high skill can possibly slowly pile damage on him.

Wyvern Rider Yen'fay is much more skillful and faster than Cherche, but he falls behind on most other stats. Nevertheless Yen'fay makes a good replacement. From Wyvern Rider's promotions, Yen'fay can grab Quick Burn to make him a great frontline attacker and makes him incredibly hard to hit on initial turns on a map and Lance/Swordbreaker which will let Yen'fay avoid other units with high skill caps, the Myrmidon, Mercenary, and Pegasus Knight units.

Blade Legend
A powerful king of Chon'sin, his now-lost homeland. Once the Blade Legend, he has succumbed to Walhart, and now serves him. Appears in Fire Emblem Awakening.

Yen'fay - Blade Legend
Yen'fay vanished like the mist, never to be seen again. Some say he returned to the Outrealm from whence he came, but none were able to witness the great swordsman's departure.

Yen'fay and Robin
Many wrote of Robin's legendary exploits, but accounts of her origins and character varied. Scholars, poets, and bards agreed on one thing alone--she loved her husband, Yen'fay, above all else.

Yen'fay is illustrated in the trading card game Fire Emblem Cipher with the following cards: 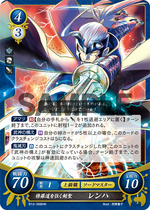 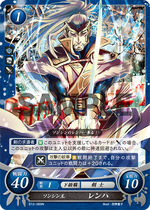 The Japanese name Lenha comes from the Portuguese word lenha (leña in Spanish), which means "firewood".

Yen'fay's English name is a mixed of the Sino-Vietnamese yên character (安) meaning "calm" which ties in with his apparent personality and tone of his voice shown during battle sequences and fay being a corruption of fèi which in Mandarin Chinese (疿) means "to be rash" which in a way serves as an oxymoron as both the alternate future and present Yen'fay are shown to have a mix of calmness and yet somewhat rash personality.