Yewfelle (イチイバル Ichībaru lit. Ichaival; transliterated as the Ichii-bal in the Fire Emblem Museum) is a holy Bow from Fire Emblem: Genealogy of the Holy War. This bow was once wielded by the Ulir the Crusader, bestowed upon him by an unidentified Divine Dragon during the Miracle of Darna. Yewfelle is the property of Ulir's descendants, who are the heirs of House Jungby of Grannvale.

In Genealogy of the Holy War, Yewfelle grants its wielder bonuses of +10 Strength and +10 Speed, alongside imbuing them with the Renewal skill. This bow may only be equipped by users possessing major Ulir holy blood, with the only characters fitting this criteria being Brigid and Febail.

By the time of Awakening, Yewfelle's power and its blood link has long since weakened, much like the rest of the Crusaders' Holy Weapons, but it is still more powerful than most manmade weapons.

Prior to the events of Genealogy of the Holy War, when Lord Ring of House Jungby left to fight in the war against Isaach, his daughter Edain persuaded him to leave Yewfelle behind, saying that she could use it to identify her missing sister Brigid.

The sisters eventually reunite north of Agustria in Chapter 3, as an amnesiac Brigid flees the clutches of the Orgahill pirates. A latent power of Yewfelle is revealed as Brigid, upon taking hold of the bow for the first time, recovers her lost memory.

The Battle of Belhalla that occurs in Chapter 5 sees Brigid disappearing without a trace, which causes her son Febail to inherit Yewfelle from her. Initially introduced in Chapter 8 as a mercenary working for Bloom out of desperation, Febail later defects to Seliph's army upon his younger sister Patty's urging, where he pledges the power of Yewfelle to liberating the continent of Grannvale from the Loptyrian Empire.

For 3,000 years, the fate of the legendary bow is unknown until it reappears alongside Balmung, Helswath, Gungnir and Valflame in the hands of the Deadlords, or more specifically Draco, whom had been summoned by Aversa in Chapter 22 of Fire Emblem Awakening. As to how the weapons were placed in the clutches of the Grimleal in the first place, remains unknown.

Ichaival and Yewfelle are derived from Ýdalir (literally "yew-dale"), the home of the god Ullr. "Ichi" is the Japanese word for yew (Taxus baccata), a coniferous tree used to make longbows, while -val and -felle could be derived from dale or valley.

Yewfelle, as it appears in the third series of the TCG. 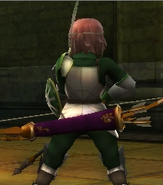