Ylisstol is the capital city of the Halidom of Ylisse and from where Queen Emmeryn rules as the Exalt, with Chrom succeeding her after the Ylisse-Plegia War.

After finding Robin in the fields and stopping a raid on a nearby village by Plegian brigands, and later on overcoming the new Risen attack, Chrom and the Shepherds lead Robin to Ylisstol to introduce him to Exalt Emmeryn. After introductions, the Shepherds left Ylisstol to go seek to acquire help from Regna Ferox to help dealing with Plegia's brigands and the Risen that began to emerge more and more.

After acquiring help from Regna Ferox, Chrom and the Shepherds returned to Ylisstol, only to hear tragic news of a village being attacked and Maribelle being kidnapped. This forced Exalt to seek parley with Gangrel, the Mad-King of Plegia that sought war wth Ylisse as part of a plan to conquer the whole continent.

As negotiations fell and war was upon them, the Shepherds rallied back to Ylisstol, where they made preparations for the incoming war. While there, "Marth" had secretly entered the castle in a hole that was made years ago by Chrom, where Marth warned Chrom and Robin that Emmeryn is to be killed as foreseen in the future. To prove that it was true, Marth killed an assassin that had infiltrated the castle to assassinate Chrom, though there was a second assassin lurking that attacked and broke Marth's mask, revealing Marth to be a woman, before Chrom killed that assassin himself. Learning that there were assassins in the castle, Chrom immediately went to go stop the impending assassination of Emmeryn, which was met with success, as they defeated Validar.

Afterwards, Chrom insisted that Emmeryn leave Ylisstol to be in another castle so that she would be safe, since Emmeryn refuses to leave her people's side. However, the plan goes awry when the Hierarch, a man that once supported Emmeryn when she first become Exalt, betrayed them for Plegia in a cowardly attempt to survive, though this would be his downfall. During the ambush, Plegian troops personally led by Gangrel besiege the capital. Emmeryn decides to return despite protests to show that she stands with her people. Gangrel captures Emmeryn and her guards, moving her to Plegia for execution.

After the failed rescue attempt of Emmeryn, which led her to make a sacrifice to try and make the people of Plegia to see the senselessness of the war. This in turn made her a martyr in Plegia and thus caused a mass desertion of Gangrel's army. As Chrom later faces Gangrel and the remnants of his army one last time, Chrom defeats Gangrel, presumedly killing the Mad-King, which liberated Ylisstol and ending the war with Plegia.

With the war reaching its conclusion, Chrom returns to Ylisstol, where he takes the role of the Exalt, though had not yet assumed the title. Along with that, he gets married and soon has a daughter named Lucina.

In Lucina's ruined future, the assassination attempt in Ylisstol is a success, where Emmeryn is killed and Chrom is gravely injured, which would lead to a chain of events that would result in Grima being resurrected and the world facing certain doom. Ylisstol becomes one of the remaining areas in the world that had not fallen into Grima's control, and continued to fight against the Fell Dragon's might.

Lucina soon had the other children of her father's companions to locate the Fire Emblem and the 5 Gemstones from Plegia, where they succeed, though at some point, Inigo's group somehow loses one of the two Gemstones they retrieved, where Lucina only succeeds in performing a partial Awakening in Mount Prism, and summoning Naga to learn of a way to return to the past to prevent Grima's resurrection.

After returning to Ylisstol where Lucina's friends, who have become divided in their decision to return to the past, where they are either with going to the past, against it, or undecided. As the group argues to the point of severing ties, a large earthquake occurs, and a large hoard of Risen are released and launch a massive assault on Ylisstol. Though the children fight valiantly along with the other soldiers in Ylisstol, hope is lost when Grima himself appears. The attack resulted in Ylisstol being in flames and only the children survive. Ylisstol's destruction ultimately secured Grima's victory over Ylisse, and possibly the world at that point, as soon his influence began to affect even Mount Prism.

As revealed in Hidden Truths, Anankos used his powers to restore the alternate timeline world that the children came from, thus Ylisstol is one of the places that was restored, and would also house graves for all the people that had perished in Grima's attacks.

Following a similar timeline to Lucina's (though Naga is killed as claimed by Grima), Ylisstol is one of the few areas that Grima has not controlled yet. Lucina sends her friends out to recover the Gemstones. Tiki, who was being protected by Lucina's best soldiers in Mount Prism, arrives and speaks with her. Grima and the Risen had seized Mount Prism, and that she was the only survivor as the her men sacrificed themselves to ensure she would reach the capital. Tiki realizes that Lucina is attempting to perform the Awakening to kill Grima.

A mysterious man arrives and attempts to kill Lucina, but his attack is blocked by Tiki, who takes the fatal blow. The man is revealed to be Grima, who is annoyed that he did not kill Lucina, who was the only significant threat. Lucina eventually arrives at the top of the ruined castle, where she reunites with Laurent, Gerome and Severa, who have brought back the Fire Emblem and the gemstone Vert. Grima arrives and taunts Lucina, before weakening her and her friends at the scene with a powerful spell. Before Grima is able to kill them, Chrom and his army from the present timeline warp in with their Naga's aid, surprising both groups. Grima summons a large group of Risen, but he is eventually defeated by them.

Despite being defeated, Grima taunts Lucina that she cannot perform the Awakening as she does not have the other gemstones. Just as he finishes this, he is surprised by extra voices coming from afar. Noire, Kjelle, Nah and Cynthia arrive with Argent and Sable, followed by Inigo, Brady, Owain and Yarne with Azure and Gules. Grima believes that he is not defeated, as he had killed Naga and corrupted Mount Prism. Lucina points out that because he defiled the sacred mountain, Naga's energy searched for the next holiest place in the world, which was Tiki's body that Grima had carelessly left behind inside. Lucina performs the Awakening, and Grima, trying to stop it, is mentally restrained by Robin, who allows Lucina to strike the fatal blow. Robin apologizes to Lucina for all the pain they've caused, and with the death of Grima, the world is returned to normal. 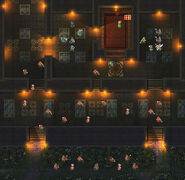 The map of inside of Ylisstol castle in Chapter 6.