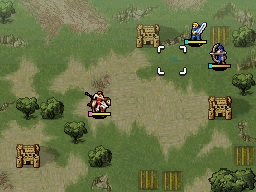 Chapter script
[view]
“In the past, there was a war known as the War of Shadows. It began when the fearsome Shadow Dragon, Medeus, launched a sudden invasion. The Kingdom of Archanea, protector of the lands, clashed with Medeus's forces. But against such superior might, Archanea was overwhelmed and trembled in defeat. Nyna, princess of Archanea, had no choice but to flee from her beloved homeland. To rescue Archanea, the Kingdom of Altea, its allied nation, sallied forth. However, it too was defeated by Medeus. With its king lost to war, Altea fell to ruins…
From his exiled shores Marth, young prince of Altea, swore he would retake his homeland. Marth never forgot his oath. Years later, he rallied an army at Talys to defeat Medeus. Starting with Caeda, Talys's princess, Marth gathered together many allies. Duke Hardin, Nyna's guardian, also became one of his trusted comrades. With Archanea's treasured "Fire Emblem" awarded to him by Nyna, Marth led the Archanean League, as its commander. In the following battles, the League wrestled back control of both Archanea and Altea. Finally, after a long and fierce battle with Shadow Dragon Medeus’s forces, Marth vanquished the Shadow Dragon… And thus did peace return to the world.
These are the events that transpired one year ago.”
—Opening Narration

Young Squires is Prologue II of Fire Emblem: New Mystery of the Emblem.

In this chapter, Kris and Ryan fight Luke and Roderick (or first Luke and then Roderick if in Normal mode) in order to determinate who will be the 7th Platoon's commander.

Draw out and fight Luke without drawing out Roderick to avoid being overwhelmed. Usage of the fortress is helpful to protect Ryan.