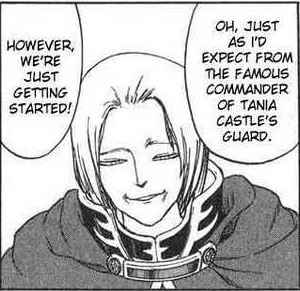 Youzen is a manga character in Fire Emblem: Hasha no Tsurugi.

Youzen was an adviser to Lord Ranward of Worde, however he was approached by mage from Bern and offered the chance to rule if he betrayed his master. Youzen had Worde castle burned from within, and cornered Ranward and the lowly soldier Danan. Danan surrendered to Youzen, and gave Ranward away as a hostage.

Youzen moved his base to nearby Olst Castle, where he laid a trap to capture the fugitive Princess Tiena of Tania. Once again he used his duplicity to capture Tiena, and forced her retainer Gant and the wandering swordsman Al to fight each other to the death in the arena.

Soon enough however Al turned the tables against Youzen, and managed to escape the area along with Gant, Tiena, Ranward, and Danan. As he tried to pursue his prisoners, Gant removed a support column in the arena, causing the roof to collapse on top of Youzen and his men. Youzen begged the mage from Bern to save his life, but instead he was executed for his failure.

Retrieved from "https://fireemblem.fandom.com/wiki/Youzen?oldid=472502"
Community content is available under CC-BY-SA unless otherwise noted.