Mik Kuhlman (Radiant Dawn)
Megan Lee (Heroes)
[view]
“Gods? Perfect? Where did you get that idea? You haven't met a lot of gods, have you? ”
—Yune to Sanaki in Part 4 Chapter 3

Yune is a non-playable character from Fire Emblem: Radiant Dawn. She is the Goddess of Chaos, and one half of Ashunera, the other being Ashera. Dheginsea framed her as being a dark god after Ashera's Three Heroes sealed her in Lehran's Medallion, using seid magic. At one time, Ashera wanted to destroy her at all costs, but Lehran convinced her to seal Yune away.

She is also the small orange bird Micaiah owns, and Yune speaks to her in this form before Micaiah sings the Galdr of Release. If the chaos of war forced her to awake, then Ashera would also awake and pass her judgment upon the world. But, if the Galdr of Release awoke her, then Ashera would have to speak to Yune first before passing her judgment. Unfortunately, Ashera broke this agreement and turned most of Tellius' inhabitants into stone.

After Micaiah sang the Galdr of Release, Yune possesses Micaiah to talk to the mortals who would lead her army against Ashera's Disciples of Order.

The Great Flood and the Medallion

When the world was young, the Laguz and the Beorc fought each other. Because of this, the goddess Ashunera flooded the world, except for Tellius. Realizing what she had done, and fearful of it happening again, she split herself into Yune (the goddess of chaos and transformation) and Ashera (the goddess of order and restriction). Ashera believed that Yune had to be silenced, so she and her three heroes fought to seal her away.

Lehran sealed her in a bronze medallion, and it came to be known as Lehran's Medallion, also known as the Fire Emblem. She could only be awakened by a war that engulfed the continent, and the chaos energies that come with it. After being sealed away, Dheginsea framed her as a dark goddess to instill a fear of war in the people, and prevent Yune's release. He also strictly forbade Goldoa and its people to be involved in any wars, taking a strict neutral stance, as an additional preventative measure.

Role before and during Radiant Dawn

After The Mad King's War, Yune appeared to Micaiah in bird form and landed on her finger. The word "Yune" popped up in Micaiah's head after this, and the bird had been called that ever since. She is also the one who contributed to Micaiah's foresight.

Throughout Part One of the game, Yune was Micaiah's constant companion. Later in the game, she became the "voice" guiding Mist and the Herons to awaken her with the Galdr of Release.

After Ashera sent her judgement upon Tellius, Yune, who is released from the medallion, periodically possessed Micaiah to use her body for a number of things, including the event-driven promotions (Ike, Sothe, and Micaiah) and telling of the history of Tellius in the Tower of Guidance. After Ashera is defeated, Yune is able to appear in her goddess form, and after a short conversation with Ike, she transforms back to a bird and flies over Tellius to restore the petrified people.

Yune is the antithesis of Ashera. While Ashera is stoic and cold, Yune is whimsical and bubbly. Unlike Ashera, she is willing to believe in the possibility of the Beorc and Laguz coexisting in harmony. Though a deity of Tellius, Yune does not believe that she, Ashera or Ashunera are worthy of determining humanity's fate. She is willing to admit that her original entity made a huge mistake and that all gods are capable of making mistakes like "creatures of flesh", although on a much grander scale.

Yune detests her title "dark god", as she is neither evil nor malevolent. She can be moody, fickle, and condescending as a result, flatly refusing to talk to people who upset her. Yune has a bond of trust of Micaiah, using her as a medium to speak to her forces and bestow her blessings on key individuals in her order.

Chaos Goddess
A being that is half of the goddess Ashunera. The goddess of chaos, who is said to have thrown the world into disorder long ago.

Yune is a flying Green Tome Dark Mythic hero who encompasses the standard high Res Mage archetype with offensive stats that allow her to apply offensive pressure on foes as well. 37 Res is perfect for inflicting her Ploy-like unique skill and can check mainly some of the most threatening blue mages in the game. 33 Atk and 27 Spd are not the highest for either category, but does lead to some modest offensive results, mainly against some blue unit match-ups, though her Spd is somewhat aided by her weapon, so she can achieve solid match-ups across the board. Her 40 Res however aids nicely with the aforementioned Ploy-style of skills as is a cornerstone stat. Her only downside is her low 15 neutral Def which leads to her downfall against the abundance of sword units in the game.
Chaos Manifest grants her a flat Res+3 buff and if her foe has any sort of visible debuff to their stats or any sort of debuff like movement restriction or Panic status, she gains an additional Atk+6 during combat and is given a guaranteed follow-up attack, helping to ensure that Yune can mow down enemies who are affected by the ever present debuffs of the game.
Chaos Named has a bit of a complex activation condition, but simply put, if there are enemies within three column centered around her who have at least 3 less Res than her, she inflicts a massive -5 debuff onto the core stats of the enemy who meets the conditions and has the highest total of all allies under that condition. While this may cause some trickiness in targeting the right unit, the debuff helps to fuel her weapon to unleash incredible damage as a result.
Glacies is a four-attack charging special that applies 80% of her Res as bonus damage to her Atk when it activates, which can lead to impressive 34 bonus damage without counting buffs. Attack Resistance Bond grants her an additional Atk/Res+5 if she adjacent to an ally during combat. Sabotage Resistance inflicts Res-7 onto any foe that has 3 less Res than Yune's and is adjacent to another unit.

As mentioned above, Red units are the bane of her existence, especially the prevalent sword units that litter the games roster. Many either innately pack Distant Counter in their Skill A or Weapon, or simply inherit is a preferred skill A. Some Green can do the same, but are not nearly as uniformly hard countering her as she is not under color disadvantage against them.

With her Support skill empty, Reposition is perhaps her best skill as she can bridge units over nontraversible terrain with her floating above them like mountains or even forests for Cavalry units. Iceberg will suit her much better since the faster cooldown will lead to more consistent activations, and thus higher potential for damage.

Sanaki: I don't understand. How can you be a goddess and not know? I thought gods were perfect beings who knew everything!.
Yune: Gods? Perfect? Where did you get that idea? You haven't met a lot of gods, have you?
Sanaki: Well, no. But divinity created life from nothing! Surely only perfect beings could do that!
Yune: We did create life, and can do many things that you creatures of flesh can't. But that doesn't make us perfect. It just means we can make mistakes on a much grander scale... We're not what you've been taught, and we're much closer to you skin-wearers than some will admit. But we do make mistakes... Sometimes we make terrible mistakes. Sometimes all it takes is one emotional outburst and the entire world is drowning underwater!

Yune is illustrated in the trading card game Fire Emblem Cipher with the following cards: 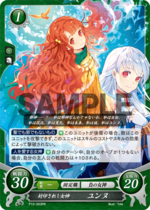 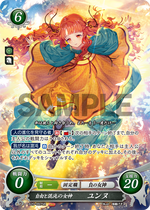