He was born in the year 1160, in a poor town in Western Faerghus. His mother was a prostitute, and the identity of his father is unknown.

At some point during his childhood, his family hosted and nursed an elderly man back to health. As a token of gratitude, he taught him how to read and write, the memory of which he kept within a notebook. Some time later, he fell deathly ill to a plague which wiped almost his entire town, but was saved and healed by the same elderly man, who passed away some time later due to natural causes. This chain of events inspired him to obtain his compassionate resolve.

In the year 1174, he is noticed by Count Rowe and taken as an adoptive son, where he took the name Yuri. It is revealed through his supports with Byleth that it was the name he was given when he was adopted by Count Rowe. Although he tells Byleth his true name in their S-support, it is never revealed to the player. In 1178, he was enrolled in Garreg Mach's officers academy but was expelled due to a scandal. When he and other knights were tasked with killing people from a gang, Yuri recognized them as old friends from before he was adopted and rebelled against said order, ultimately slaying the knights.

Due to the scandal, Yuri was slated for execution but Aelfric had him pardoned and then he was sent to Abyss. In actuality, Archbishop Rhea tasked Yuri with keeping an eye on Aelfric, due to his recent suspicious behavior.

Yuri was hired as an assassin by an unknown sponsor to kill Count Varley's young daughter, Bernadetta, as she possessed the Crest of Indech. He infiltrated the House Varley by taking on a job as an assistant gardener. Believing that he could only accomplish the job by obtaining her trust, he befriended her. Bernadetta considered him to be her first friend and they played around the gardens. Once enough trust had been formed, Yuri snuck into her room to kill her, but could not bring himself to do so, which he claimed after the time-skip was his biggest mistake at the time. This brief moment of hesitation allowed for Count Varley to burst in and catch him in the act, where he had his men severely beat him up, though he survived. Bernadetta was not informed of the assassination attempt, mistakenly believing that she was responsible for his death. Yuri survived however, and returned to Abyss.

First appearing in Chapter 1, Yuri and the other Abyssians have been dealing with an unusual amount of surface contact, all of whom have been aggressive. He is seen planning with Balthus when Byleth and their students discover a hole in the surface leading into the Abyss. They encounter an Abyssian, who flees to Yuri and informs him of their presence. Yuri believes that they do not intend to attack with their meager numbers, but decides to meet them as they are not knights, but are still working with the Church.

Upon meeting them, the Abyssians challenge the arrivals, but are promptly defeated. Balthus and the others inform the group of their peoples' plight, and Byleth agrees to help them. They are able to drive the invading mercenaries out, thanks to a trap set up by Yuri to lure all of the mercenaries to them.

Yuri is described as being of crass speech but extremely devoted to the protection of Abyssians, even when it is not easy to tell. Upon Yuri's introduction, it is clear that Yuri is sharp-tongued and reserved, dryly teasing his fellow classmates. However, he is also shown to be kind under his rough exterior, and he cares deeply for the safety of those who live in Abyss, due to his upbringing in which he barely survived a plague that killed numerous villagers, thanks to the assistance of an elderly man his family had taken care of.

Like Claude, Yuri is an extremely skilled tactician and his personality can catch others off-guard. Yuri always ensures that his tactics will always work as he expected, even if it means he has to temporarily betray his allies without making them aware of his plans. Being the boss of a group of Abyssians, Yuri also keeps his secrets well hidden to others unless he has complete trust in them.

He is quite flirtatious with Byleth at times, though it can difficult to tell whether it is genuine or not.

Yuri serves as an extremely fast, versatile character in both physical and magical capability. He has the highest Speed growth rate in the game, coupled with good Charm and Luck, as well as reasonable Strength and Dexterity growths. All of his other growths are average or below-average, especially his Health growth, making him fragile if he doesn't dodge an attack. His personal skill, Honorable Spirit, makes him ideal as a lone wolf character who can go off on his own and still fight ably. The one thing that holds him back are his weaknesses in Lance, Axe, Riding and Flying, which can hinder him in acquiring many different classes.

There are a large number of skills that Yuri should look to acquire, regardless of which class he ends up as by the end-game. In nearly any run, Thief is valuable to acquire for Steal, which he can easily use with his Speed. His budding talent in Bows means Archer can be acquired easily for Hit +20, giving him more accuracy if needed. Mage can give him Fiendish Blow to augment his magic damage, while Priest can give him Miracle to take advantage of his good Luck stat. Despite his skill weaknesses, Brigand is a good choice to acquire Death Blow, while Cavalier can give him Desperation to take advantage of his exceptional Speed, although both classes will require diligent training. Mortal Savant is a potential late-game class for Yuri, but it should not be used for leveling purposes due to the Speed growth penalty. Unfortunately, his weakness in Flying and Axes make Wyvern Rider and Wyvern Lord difficult to acquire, and thus make it hard for him to get Alert Stance+.

Yuri and Hapi
"End of spoilers. It's a pleasure doing business with you!" 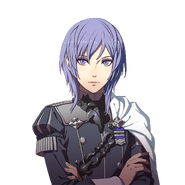 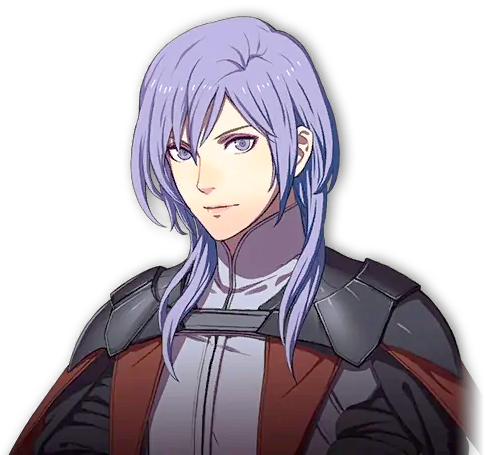 Yuri's portrait after the time skip.