Yusuke Kozaki ( コザキユースケ Kozaki Yūsuke) is an illustrator and character designer. He went to a graphic design school where he studied publicity oriented design and commercial use. From there he started work as a character designer starting with the 2005 anime series Speed Grapher and accepted the job in order to earn money (despite initially wanting to become a 'Mangaka' comic artist/cartoonist). After trying the job and finding it interesting, he got more work in that field in the animation, film, and videogame industry. For his art he used to draw on paper first before finishing the project digitally on the computer, but has since then exclusively produced digital art, mainly using Photoshop.

Despite his heightened prominence within the Fire Emblem series emerging from his work in Awakening, his first contact with the series began back in 2001 where he contributed three card illustrations for the Fire Emblem: Trading Card Game as part of the Jugdral Anthology set.[1] He also created two Newcomer artworks for Robin, Lucina, and Corrin in Super Smash Bros. for Nintendo 3DS and Wii U.

In an interview with Nintendo president Satoru Iwata, Kozaki described how he was first contacted to work on Awakening when he received an email request from Intelligent Systems to design about 60 characters for an unidentified game, to which his first response was "Is that for Fire Emblem?"[2]

In a separate interview with the Awakening English translators, 8-4, Ltd., upon being inquired about the different visual direction Awakening took as compared to previous games in the series, art director Toshiyuki Kusakihara revealed that they had been planning to release the game outside Japan from the start and that part of the reason Kozaki was hired was due to his work on the 2008 Nintendo Wii game No More Heroes, which was well-received overseas. He further notes that "There was definitely a movement with this project to give everything a fresh new look, so we wanted to find a character designer who could work in a different direction from previous FE games." Kusakihara describes Kozaki's unique direction by saying that he attempts to follow a rule when drawing wherein "his character's basic personalities bubble up to the surface, so you can look at a character and immediately tell a fair amount about what's going on inside their mind. For example in Awakening, Gaius is a character who likes sweets, so Kozaki-san drew him literally carrying candy. His final concept art has him with this teddy bear-shaped lollipop attached to his clothes".[3] In the same interview, Awakening project manager Masahiro Higuchi states that Cherche was the first character that Kozaki came up with.[4]

Relating to specific Awakening characters, Kozaki himself has stated that Lucina was his favorite to design and that personality wise he feels he is most closely connected with Vaike. When creating the armored characters, the art director actually designed the armor, with Kozaki designing the characters in the armor afterwards. Before doing the designs for Awakening Kozaki hadn't played a Fire Emblem game before and he didn't know a lot about the series. He said that because of this he wasn't influenced by any previous designs though, so he was able to work more freely. Concerning some fans skepticism with the new Awakening designs featuring more eccentric dress and fanservice than previous games in the series, he commented that they were not designed with fanservice or sexualization in mind, and that it was the characters personalities that led to their design. When asked if any characters got scrapped during development, he noted that since there where a lot of characters to draw there was no surprise when characters had to be dropped. When asked if were there any other legacy Fire Emblem characters that he would have liked to illustrate for the Fire Emblem Awakening DLC (in addition to Katarina), he answered that he would have liked to have drawn Ike from Radiant Dawn.

In a 2015 interview with Famitsu, Fates developers Maeda Kouhe and Masahiro Higuchi expressed that it was universally agreed amongst the staff for Kozaki to return as character designer from Awakening at the very beginning of developing Fire Emblem Fates; with an offer for the job being sent to him immediately. Due to there being more characters in Fates then in the previous game there were initial worries that Kozaki might decline, so when he agreed to reprise his role the developers were thankful for his return.[5] 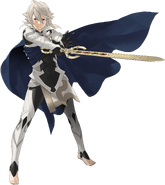 Official artwork of the Male Corrin from Fire Emblem Fates.

Kozaki's original idea for the game package (right). Nintendo wanted something different from what they had before with previous Fire Emblem games; they wanted something more like a group portrait (left, final).