Lauren Landa
[view]
“In truth, I seek a sparring partner, so perhaps we could aid each other. It wouldn't do to discover our muscles have gone flabby in our hour of need.”
—Yuzu

Yuzu is an original character created for the trading card game Fire Emblem 0 (Cipher). She is a shy young samurai serving in the Hoshido army.

In Series 4 she joins Tsubasa's Archanean army, in opposition to her friends Emma and Shade.

Yuzu has trained in the arts of combat from an early age and she is always keen to prove her skills against formidable opponents. And while she has a serious and unpretending personality, she can be a little socially awkward. Like many girls her age, she has a fondness of cute things.

Yuzu is probably the weakest of the Cipher DLC characters, due to her poor toolkit, but she still has her uses. She equipped with the Warrior's Sword, which has a great Attack bonus. Depending on recruitment, She can get easy kills with her Fire spell. As a suggestion, any of your other sword users can have a better use with this weapon. Other than that, She is a oddball with great potential. After leveling up, she gets Sagittae that can help out her offense but her accuracy will be poor.

It should be noted that Yuzu has some of the strongest growth rates in the game. This, together with her middling performance in her base class, availability as early as Act 1 and extremely high bases, makes her a prime candidate for the Pitchfork. The cavalier line is a good option for her, ensuring that she can't get Def-screwed, as this is her weakest stat.

With Shade, both can fit in any groups, though she can be of better help in Alm's route, as he can get more magic units that can help out on his path. Depending on when you get/ level up Delthea, Yuzu would be the best mage in the crew. For Celica's path, Yuzu would (potentially) be the third Priestess in the army (with Celica herself serving as a unofficial 4th one), thus she would be the jack of all trades. She weaker than Celica and Mae, leaving her on par with Sonya and Boey, with Yuzu the fastest out of the three, Boey the most tanky, Sonya has the best spell list.

After the war, Yuzu departed Valentia for a new land. History makes no further mention of her, but some say she became well versed in a variety of classes during her quest to perfect the arts of war. Day and night, she could be seen honing her skills on the battlefield.

Yuzu appears in the following cards: 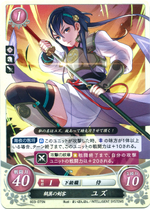 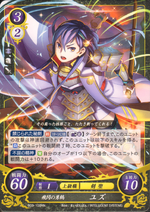 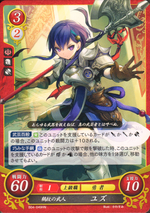 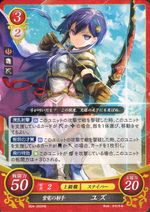 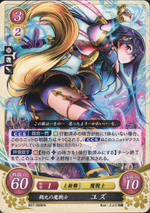 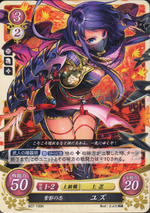 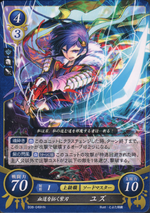 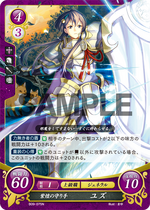 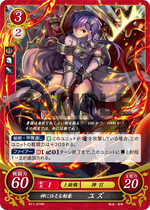 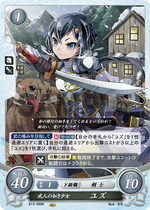 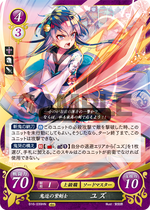 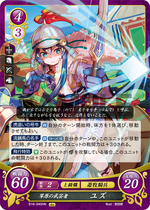 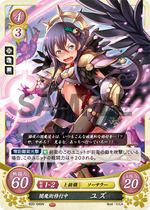 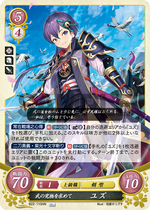 Yuzu is one of the more interesting Cipher characters. Her Series 3 Samurai N card gives a +10 ATK on your turn if you have any Black Units Deployed, making her an okay Main Character for an all-Black deck despite the fact that her N card is White.

Her Series 3 Swordsmaster HN card can allow you an unavoidable strike, but at the cost of Yuzu automatically destroying herself at the end of the battle. However, if Yuzu is the Main Character, you'll have to destroy an Orb instead. Her Swordmaster also gives her an extra 10 ATK when you have one or no Orbs left, meaning she plays decently well when on the ropes. However, she only hits 70 ATK with the extra boost from being so close to defeat, making her a good finisher, while also giving her a lackluster early game.

Her Red Hero HN, meanwhile, has more of an attacker focus, as she gains an extra 10 ATK whenever she's Supported by a Sword, Lance, or Axe Unit, and allows you to move an Ally Unit when she defeats a foe while being Supported by a Flier or Rider Unit. This makes her a good choice for Pegasus Knight decks as she will hit 100 ATK whenever she is Supported by a Pegasus Knight, however, it is likely that she will be the only real attacker in such decks barring Triangle Attackers.

Her Series 7 Master Ninja card activates its effect the first time each turn you deploy a Shuriken Unit, giving a +10 ATK boost to both herself and the Deployed Unit, meaning she can be played in Shuriken decks with fairly good results. Her S7 Dread Fighter card is also geared toward Shuriken decks, with a CCS +10 ATK while you have all other Units Untapped, giving her a decent ATK power in an otherwise lower-ATK deck, and a Skill making her be treated as a 1-2 Range Shuriken Unit for the turn if you Tap an ally Shuriken Unit.

In the end, with fairly decent cards all around and a Color Pool better than her Cipher-Exclusive contemporaries, Yuzu is arguably the best of the four Cipher characters.

Yuzu is a citrus fruit and plant originating in East Asia.