“Fifteen years ago, I was a royal guardsman serving under King Dagnell's brother Ahab. When you were born, Princess Maria, the king and queen were overjoyed, but Ahab saw your brand and called you a demon. He ordered me to kill the newborn princess to prevent another catastrophe like Kranion. I took you from your crib and brought you into the forest, but I couldn't do it. Instead, I stole the Ring of Salia and left you and it in the care of a priest who promised he would take you far away. But now you've returned here, to your homeland of Salia... Could this truly be a sign from the Goddess? No... My sins are beyond redemption. Forgive me, Princess Maria... When Ahab's machinations were found out, I assisted in his plot to usurp the throne and bring an end to the rightful House of Salia...”
—Zachariah, in a conversation with Katri

Zacharia (ザカリア Zakaria, fan translated as Zachariah) is a playable character from TearRing Saga: Utna Heroes Saga. He is a general of Salia under the command of Ahab.

During Ahab's coup against the royal family of Salia, Zacharia received orders from him to murder an infant Princess Maria. He took her into the forest, but instead of fulfilling his orders, he entrusted her to Father Law's care. He later ensured that King Dagnell and Queen Maria were imprisoned instead of killed.

During the game's events, Zacharia is ordered by Ahab to capture the city of Blood from Lionheart. However, he is defeated by Holmes's army and spared by Katri, whom he recognizes as Maria upon seeing her holy markings. Afterwards, he assist Holmes's army in defeating Ahab and reveals the whereabouts of Glaus and Maria.

Zachariah appears as a boss in Map 22 but joins automatically from the start of Map 23.

Zacharia's stats are typical General stats - high Strength, Defense and HP, with average Skill and Speed. He is a solid wall when first obtained, as well as being a good filler character in the endgame. However, he is hit hard by his low growths, lack of skills, Big Shield aside, and low movement with no way to increase it without using items. Ultimately he will become worse than both Norton (due to movement and better offence) and Billford (due to his skills).

“So, it's come to this... Very well, I shall be your opponent!”
—Zacharia's battle quote as an enemy 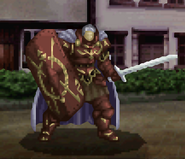