Captain of the Begnion Occupational Army

Armor Lance
[view]
“Intruders, you say?! What with a full battalion stationed here? The gall! And the intrigue! Now, listen up, my men, catch 'em midstream and filet 'em like fish!”
—Zaitan

Zaitan (ザイタン) is a boss character from Fire Emblem: Radiant Dawn. He is a Begnion knight holding a Daein storehouse where supplies and medicine are kept. Laura's abbot needs this medicine and Micaiah and the Dawn Brigade decide to help her. Though it is not needed to kill Zaitan in order to win the chapter, he awards a large amount of Experience. Whether he lives or dies is for the player to decide.

Zaitan is a strong opponent with high defense. Have Sothe plunder the chest behind him and then attack him with Nolan. Micaiah's Thani tome (depending on how you've leveled her) should do enough damage to cause a one hit kill. If not, having a strong character like Nolan weaken him first may also lead to an easy victory against the boss.

“Zaitan: Don't move a finger, thief, or I'll skewer you with my lance and serve you for lunch!”
—Default Conversation

Zaitan: The Silver-Haired Maiden! I've got you! Lucky for you, Jarod wants you alive—but there's no escaping now!
Micaiah: I'm afraid I have to disappoint you.
Zaitan: Oh, how pompous! Try to "disappoint" me, and I'll break both your arms!

Zaitan: And what do we have here? A decent lady like you mixed up in such scurrilous company?!
Laura: You're a fine one to talk! You Begnion mock the will of the goddess! Repent your sins!
Zaitan: How dare you preach at me, you ignorant little girl! Soon, you'll be naught but rust on my lance! 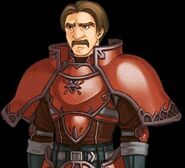